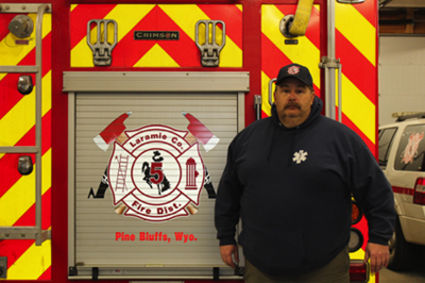 The Christmas season is a merry time of year so much so that it almost seems like nothing could go wrong. However, per Laramie County Fire District #5 training Captain, Jon Christy, that is not always the case. "Trees can catch fire, animals and children can ingest things they aren't supposed to and also climbing ladders to decorate can be harmful." stated Christy.

With Christmas trees many people do not realize the dangers of having a real tree. While the fragrance and beauty of the real tree can be breath taking, there are many precautions you can take to make sure safety is an important factor.

According to the National Fire Protection Agency, "U.S. fire departments responded to an estimated average of 200 home1structure fires per year that began with Christmas trees in 2011-2015. These fires caused an annual average of 6 civilian deaths, 16 civilian injuries, and $14.8 million in direct property damage."

There are precautions you can take to insure this type of tragedy doesn't hit your house. "Make sure you water your tree daily, secondly don't put candles with an open flame on your tree.another way top prevent fires starting with buying a healthy green tree." stated Christy

There are many things that could harm your child and pets during the christmas season. Christy advises, "One important thing to make sure of is not having glass ornaments or bigger ornaments so they are not easily put into a little ones or a pets mouth." Another good idea is to keep wires to light up out of reach. "Dogs could easily bite a wire on accident causing not only a shocking experience for them but also raising the fire risk even more." added Christy.

While decorating the outside of the house could be tricky sometimes, but the number one rule of ladder safety is making sure that you do not climb a ladder without someone else there to stabilize the bottom of the ladder. Make sure the ladder extends further than the place you want to work so then you are not standing on the unbalanced part of the ladder.

Make sure to keep your family safe this Christmas season and study up on ways to keep things merry this season.