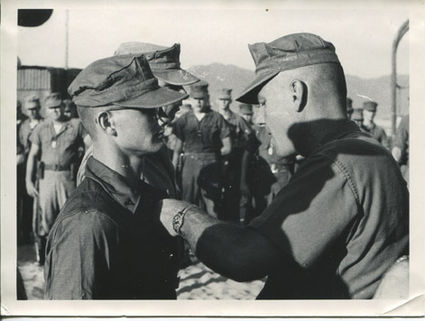 Summer of 1963 changed the life of a small town Granite City, Illinois man. Lewis Laboray made a decision to leave his job as a Pin spotter mechanic to serve in the United States Marines.

Laboray graduated from high school and went to work at the local bowling alley, and then for American Zinc which later became MX Zinc.

During his time working as a special alloy caster, he decided he needed a new vehicle, and that would become a military jeep.

"I chose the Marines, because my brother went in the Navy." Laboray said with a smile. "I have another brother who went in the Army in 1970 and while in Vietnam, he was injured when a fellow soldier was disarming a bomb, and it blew up in his face!" Laboray went on to say, "He lost an arm, eyesight and hearing, but he didn't quit. A few years ago he got married!"

Laboray went to boot camp in San Diego, California. Then to Camp Pendleton, California, and from there he was assigned to Camp Chu Lai. A marine base located roughly 35 miles southeast of DaNang in South Vietnam. "I was there for 2 years and 10 days!" he said.

While in Vietnam, Laboray went through the ranks and was a sargeant just before his discharge in 1967. While in Vietnam he also received the Presidential Unit medal, Naval Citation, Good Conduct medal, 2 Vietnam campaign medals, and the National Defense medal. "I liked my job," he stated and went on to say, "I think the military is good for all leaving high school. It gives them training, benefits and teaches commitment."

After returning from Vietnam, Laboray was stationed at El Toro, California, where the military offered them jobs as drill instructors, but Laboray didn't want to stay in California. "We were also offered jobs with the local police departments, but I chose to return home to Granite City, Illinois and pick up where I left off." stated Laboray.

Laboray attended carpenter school and then went to work for Cooper Coating as a field boss. Cooper Coating was based out of Casper, Wyoming and covered 10 states. This would mean a move to Wyoming.

Experience from the military made it easy for Laboray to settle into his new career and infact, helped him work 9 months without a day off! "I was young, and I could do it," said Laboray. 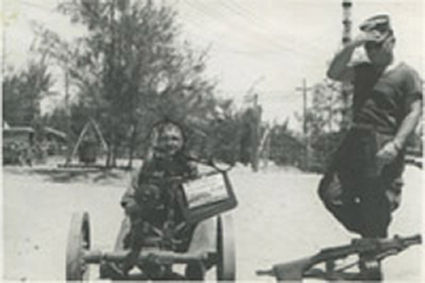 Laboray sits in a seat attached to a machine gun confiscated from the Viet Cong.

He reflected back on an incident that happened in Vietnam. "My squadron was the Command Center, and I would have to drive to deliver intel and such. One day, the Leutient told me to get my jeep and we are heading out. I was given no details just go and I headed where he told me to go. Now we are not suppose to leave the compound without proper notification and protection, but we did. He had me park by a rice paddy and we walked from there in a village near Amtan. After he finished his business, we headed back to the jeep. Nightfall had come and I realized we were not armed properly, and I didn't know if anyone even knew we were there. I checked the jeep for booby trap explosives and then we started back to camp. It could have really turned out bad, if we would have encountered the Viet Cong!" He further added, "I was glad to be back to camp!"

Another fond memory, Laboray shares is the time his Commanding Officer purchased 3000 lobsters from the local villages and feed us all lobster for Christmas. "It was great food. I also liked the rice and fish heads from the locals!" Laboray said with a grin, "I liked it and I haven't had any in years!"