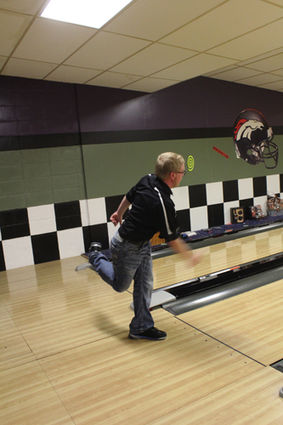 Tristen Zitek sends his bowling ball down the lane on Tuesday night league.

Pine Bowl and the Spare Room is going into their 40th league season. Owners Jim and Kate Zitek have leagues on 5 of the 7 nights of the week. 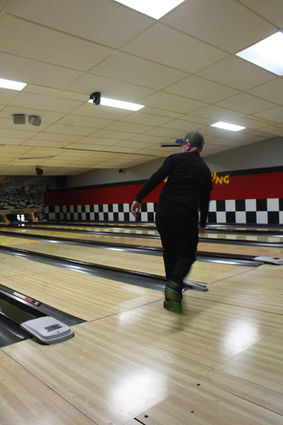 Tayten Zitek watches his ball go down the lane during Tuesday night league.

Leagues count go up to 8 teams and there are 8 leagues. The 2017-2018 season started in September and finishes in late April. This particular season is a split season with the first half of the season finishing up before Christmas. This week is the first league play of the second half of the season.

Bowlers from around the area, drive over to bowl in the Pine Bowl leagues. Some come from Kimball, Nebraska, as well as from Cheyenne, Wyoming as well.

There is open bowling on Thursdays and Saturdays where one can practice and fine tune their game, form and get use to their new shoes or ball.

"High school bowling should be starting in the near future," said Zitek. There are many youngsters who compete, and bowl. "Some are in league, such as my grandsons, Tristen and Tayten Zitek." Zitek stated.

Tristen Zitek bowls on a couple of leagues, and has bowled the perfect "300" game.