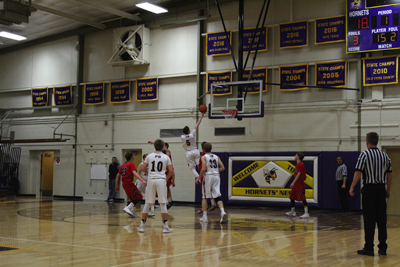 Hornets #5 Haize Fornstrom rebounds the ball away from the Tigers.

Tuesday, January 23rd the Pine Bluffs Hornets demolished the Lusk Tigers in a tough battle. With a final score of 84 - 36 the Hornets made sure they had the win.

In the first period the Hornets made sure to guarantee the win by starting off with a total of 29 points, while the Tigers only had 7 points.

Second period the tigers tried to catch up but failed, they only gained another 10 points putting the score now at 17 to the Hornets 54 points.

In the third and fourth period the hornets gathered another 30 points bringing the final score to 84 -36.

There are four game leaders for this gam...