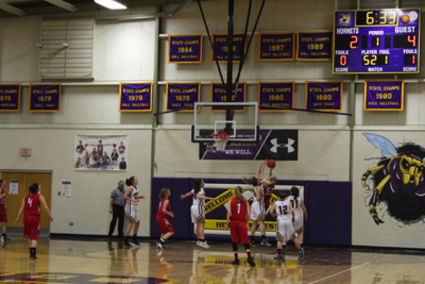 Hornets #22 Hyleigh Fornstrom defends the hoop as her teammates prepare for a rebound.

The Pine Bluffs Lady Hornets game against Lusk Tigers, made sure to keep everyone on their toes on both teams.

In the next period the Hornets gained another 7 points. The Tigers pulled ahead and gained 11 more points. At the end of second period the score was 24 - 27 the Tigers were ahead.

The third period found the Hornets gaining 12 more points, and while the Tigers only gained 7 po...