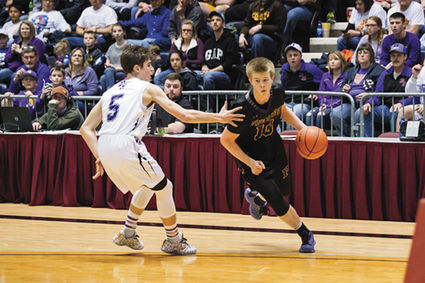 Andrew Fornstrom finds a lane against a Wind River defender during the final round of the 2A Wyoming State Basketball Championship held in Casper last week. The Hornets defeated Wind River 73-68 to earn their second state title in three yearsa. Last year, Pine Bluffs lost to Wind River in the semifinals round, but that didn't really play into coaches or players' minds according ot head coach Tyler Kimzey.

Pine Bluffs doesn't know how to lose on the basketball court.

At least that's how they played this year.

The Hornets capped off yet another unforgettable season this weekend with a 2A Boys State Championship in Casper. Pine Bluffs finished the tournament Friday night with a 73-68 win over Wind River.

Many will remember last year's semifinals loss against the same team at state.

But it wasn't on the players' minds.