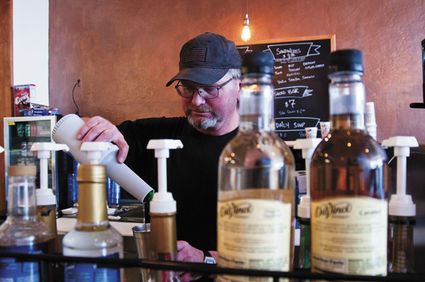 Cody Ipsen makes a chocolate malt at The Butcher's Pantry on Main Street. Named for the butcher shops that occupied the building in the early 1900s, the business serves as a combination restaurant and general store. The grand opening is scheduled for Saturday at 108 Main Street in Burns.

BURNS - Locals streamed in and out of Burns' newest business as owner Cody Ipsen added the finishing touches Tuesday afternoon.

A mix of a general store, restaurant and place to hang out, The Butcher's Pantry on Main Street opened its doors last week for a soft opening. A grand opening is set for Saturday.

Renovating the 101-year-old building where Butcher's Pantry was a personal project for Ipsen, a semi-retired construction worker who spent his career "flipping houses."

"I loved it," he said. "This is one we've planned on hanging on to for a while."

Walking into the business, one quic...