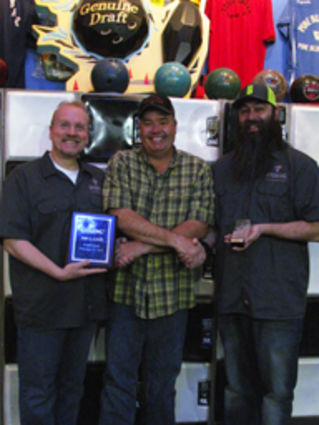 Achieving the perfect game is thrilling, and intense at the same time. This was true for Frank Smith of Pine Bluffs recently.

Smith who bowls on the Tuesday Men's league at Pine Bowl on the team "Wyoming Malting" experienced his first ever perfect 300 game.

Smith was born in Longview, Washington, and grew up in Castlerock, Washington. "It is a small community of around 1800 people." Smith stated. "We weren't a big town, but we did have things to do, and one was bowling." Both his parents bowled, influencing this football and basketball athlete.

While in middle school, Smith starting bowling. "We bowled with a plastic ball." he stated. He eventually joined the high school league.

As a youth bowler, his average was in the 160s. In high school, he achieved a higher average and ranked high on his high school team.

"The highest I ever achieved was a 299 and that seemed to be the way throughout high school and into my college years." Smith stated.

As a college bowler, Smith was able to bring his average up into the 200s and maintained an average of 210 for sometime.

After college, Smith took off time from bowling due to a wrist injury in 1998. It would be 2015 the next time Smith joined a bowling league.

Smith's career has moved him several times, with the latest in 2015. This move brought him to Pine Bluffs, Wyoming,.

He decided to try his luck again at bowling, since his wrist had healed.

Smith is a member of the Wyoming Malting Tuesday night team with members: Chad Brown, Justin Miller and Andy Tatun.

"It's a fun and friendly competition." Smith said. "I enjoy the camaraderie and the game itself." he added.

When Smith hit his perfect game, Chris Zitek video recorded it and then gave Smith a signed bowling pin commemorating the game.