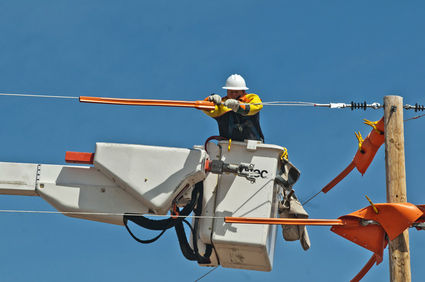 EGBERT - Just off a dusty dirt road somewhere in southeastern Laramie County, Jeremy Fryda and his crew of linemen are hard at work ensuring the area's most rural residents have electricty.

Today, it's a warm April afternoon with a light wind.

"It's really nice today," he says. "But these guys are out here working when the snow is flying."

Fryda is one of dozens of linemen who work for High West Energy.

Based in Pine Bluffs, the company provides power to rural customers from Sidney, Neb. to Laramie.

Linemen have one of the most demanding and dangerous career paths someone can choose. On top of that, crews are often faced with working in the aftermath of severe weather events.

Fortunately Tuesday wasn't one of those days. Instead, Fryda and his crew were at work replacing old power lines a few miles north of Egbert.

As Fryda discussed his job, Karl Zerck was busy putting the final touches on replacement line. Hanging above the earth in a bucket truck, Zerk wore several layers of protective equipment.

And on top of that, he blanketed electrical lines with rubber sheets.

In an industry in which one wrong move could be someone's last, safety is paramount.

But out of all of the equipment linemen use, the first line of defense is their rubber gloves, Fryda said.

Each morning before heading out to a job site, linemen inflate their gloves to check for holes. If they either hear air rushing out or see the inside bright yellow of the gloves, they are discarded.

Some days, High West Linemen will travel an hour-and-a-half before they're even on a job site.

"We do our best to make sure the lights stay on," Haas said.