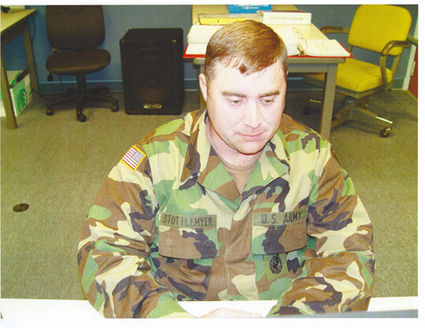 U. S. Army soldier, Jeffrey C. Stottlemyer, working on base with signal communications.

Traveling was not a new concept to Jeffrey Clay Stottlemyer. Born in Hampton, Iowa in November of 1965. He is the son of a minister, and his father's work took him many places in his young life.

The family settled in Winslow, Arizona, where he would graduate from Winslow Senior High School in 1984.

After graduation, Stottlemyer worked a variety of jobs, and even started his own landscaping business. "I gave my best effort and it was doing great, just couldn't find my place...not what I wanted to be doing for a career." he stated .

At the age of 23, after trying different things, he thought about the military. "My brother served in the United States Air Force, and my grandfather was in the United States Army, and after listening to both, I chose to follow in my granddad's footsteps...I went Army!" Stottlemyer said with strong conviction.

From desert region of Arizona, Stottlemyer headed to basic training in Fort Jackson, South Carolina. "This was a cultural shock, as well as climate change for me." he said. "We were worlds apart from home." he added.

His time at Fort Jackson, would prepare him for tech school at Fort Gordon, near Augusta, Georgia. He would spend 16 weeks at tech school and he was glad to be leaving the climate as he headed out to a climate a little bit closer to home...Fort Bliss, at El Paso, Texas. However, fate would play a part in taking him back to Fort Gordon years later.

After a tour in Texas, as a communication signalman, Stottlemyer headed overseas. His duty station would be more than a tour of duty, but a family reunion of sorts. "I have relatives I had not met yet, and while in Germany, I met many, visited many places, and toured much of Europe as I could!" he declared. While stationed at Darmstadt, Germany, with the 440 Signal Battalion, he was one of the ones to test the newest signal equipment. "This was a wonderful unique experience, and testing new equipment that was on the cutting edge I was excited. I would never forget this tour!" he stated. This turned out to be a dream tour of duty, and with his love of travel, seeing sights he only imagined, and meeting family he thought he never would, he reluctantly took his next tour of duty taking him back to Texas. This time he would land at Fort Hood.

Fort Hood was a shocker for this soldier. This is a massive base. "It is like a huge city, and it even has 6 zip codes just for the base!!" he exclaimed. "You could actually get lost on Fort Hood!" he said with a laugh.

A transfer would soon come his way, and Stottlemyer found himself on the west coast, stationed at Fort Lewis, in Washington. He would do his tour and enjoy what he referred to as a hidden secret paradise on the west coast. Then it would be off to Korea.

Stottlemyer would serve a year in South Korea at Kunsan Air Force Base located at Gunsan Airport, on the west coast of the South Korean peninsula by the Yellow Sea. As his time was nearing end, he was given a choice of duty stations and headed back to Fort Hood. He would be with the 1st Calvary Signal group.

He then applied for a special duty assignment, and found himself back at Fort Jackson, South Carolina in school. He would become a recruiter for the Denver Recruiting out of Colorado Springs,Colorado.

Stottlemyer would spend three years there, and then find himself back in Korea at Camp Stanley, in his regular career field but as a Section Sergeant in the Signal Platoon.

During this tour of duty, he would develop a condition with his eye, and would be medivaced back to the states. He would spend 22 months at Fort Lewis, Washington, Wounded Warrior Battalion. Upon his discharge from the Wounded Warrior Battalion, fate would send him back to Fort Gordon, Georgia. His new assignment was supply sergeant, until he received his certification and license as a master amour. He would head back to Colorado Springs, where he would retire from the United States Army, after 22 years.

Thank you for your service Sgt. Stottlemyer. 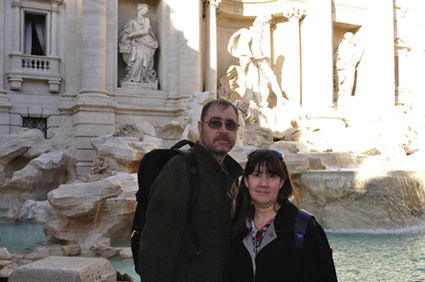 Stottlemyer, left with his wife Alana at the Trevi fountain, in Rome, Italy.