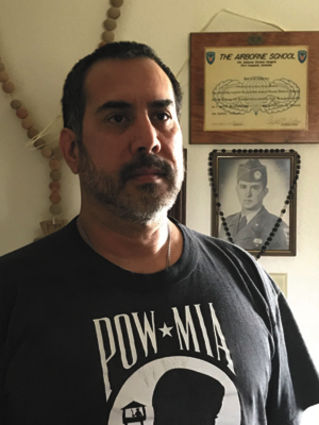 Kevin Borquez poses in front of a picture of his dad who served in the United States Army.

Kevin F. Borquez takes pride in his family heritage...as well as his family's military background. It is with this deep respect for his dad, his uncles, and cousins and their time in the military that brought him to serve.

Borquez was born and raised in Monterey Park, California. He went to high school at Mark Keppel High School. Upon graduating, he entered California State University at Los Angeles. His studies were focused and he completed his studies with a degree in Criminal Justice.

Using his knowledge, Borguez was hired at a bodyguard to some of California's entertainment stars. Some...