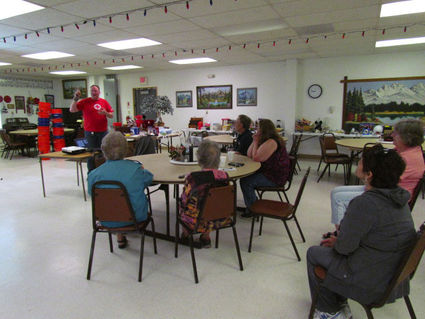 James Ledwith, a Red Cross Disaster Preparedness Program director presents to Elaine Jessop, LaVetra Lanning and others on how to be prepared for natural and other disasters that may occur in our area.

Speaking with a deep Irish accent, James Lenell Lewith, a disaster preparedness director for the American Red Cross talked about programs available from the Red Cross, as well as how to be prepared and things one can do for disasters that may occur.

Lewith, a native from Ireland, came to the United States, a few years ago after meeting his wife in Ireland. " She won out so I moved here," Lewith said with a smile.

Prior to volunteering for the American Red Cross, Lewith stated he had many years experience with disaster aid, working with trauma victims as well. "We are the 'people' side of helping; food, water, shelters and more." he said.

He talked about how National Guard came out and helped here in Pine Bluffs shortly after the serious hail storm Pine Bluffs suffered two years ago.

"After a disaster," he explained, "we are the next step. We are the best part of the worse day!" Lewith explained how the program works with other entities such as church groups, cities and towns, and medical groups for aid for disaster victims.

He explained how volunteerism is the best source for the American Red Cross. "There were several volunteers from the Wyoming/Colorado area went down to Texas for Hurricane recovery; some went to Las Vegas, Nevada for assistance with mental health and trauma after the theater shooting.

Doing disaster preparedness, is just one of the many programs they have. Lewith went on to inform the citizens from the Pine Bluffs area of the many programs out there. "We assist with wild fire evacuation, shelters, food and water; we assist with getting our military members home when needed for a family emergency or sometimes it is just getting news to a soldier that he is now a dad!" he stated.

"Of the monies donated to the American Red Cross, 91¢ goes to direct operations for us, and 9¢ goes towards insurance, office etc." he explained.

As the presentation came to a close, Lewith talked about the bucket program. Each person attending the program received a bucket with some survival items in it. "Plan for three days, put other items in your bucket, such as protein, water, blankets, and first aid items." he said.

From buckets to pillowcases, Lewith talked about a program in Cheyenne schools where students are given pillowcases to hold their items in , when there is a disaster. These pillowcases are sponsored by Disney.

The Red Cross also works in conjunction with the local fire departments with providing smoke alarms. "If your smoke detector is ten years or older, it is time to replace it, as they will deteriorate." he said, and added that they respond to approximately 80,000 home fires a year nationwide. "We assist in getting them supplies, a place to stay, and sometimes we are instrumental in getting medication filled on emergency for a victim of a fire.!" The American Red Cross is here to help.