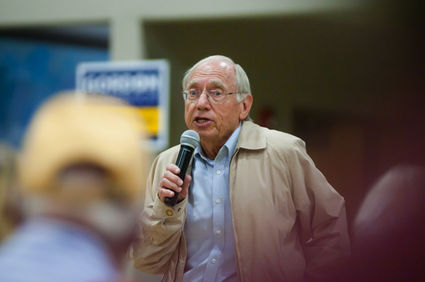 U.S. Senate candidate Charlie Hardy speaks at the Lawrence Anderson Memorial Pie Social in Pine Bluffs Sunday. Hardy was one of several local and statewide candidates who spoke at the event.

Republican candidates for federal, statewide and local offices had a chance to meet Laramie County residents and give their reasons to be elected to office last week during the Lawrence Anderson Memorial Politics and Pie Social held in Pine Bluffs Sunday.

Event organizers touted that each candidate gets an even footing to speak directly to Laramie County voters be it well-known incumbents such as U.S. Senator John Barrasso or relatively unknown candidates.