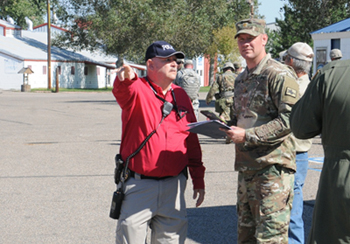 DOUGLAS, Wyo. - May 27 was a wake-up call for Converse County Emergency Management Coordinator Russ Dalgarn. A sizable tornado rolled through adjacent northeast Laramie County. The recent storm got the attention of local residents, and Dalgarn said the unpredictable weather event prompted him to start organizing a response team which now involves the Wyoming National Guard, specifically the 133rd Engineer Company, based in Laramie.

"The thing that keeps me awake at three in the morning is this. 'What if I have a grandstand full of people and something bad happens?'" Dalgarn said.

Dalgarn began coordinating with Converse County local emergency response organizations in central and eastern Wyoming. He also reached out to the Wyoming National Guard's Maj. Cole Kelly, the joint director of military services, in Cheyenne, who offered access to the National Guard Reaction Force, staffed by the 133rd.

Kelly has been working with several counties year-round as part of an ongoing partnership, providing capabilities briefings and, when asked, exercising with local first responders.

The exercise with Converse County culminated in the joint event between the county's civilian emergency teams and the Wyoming National Guard on Sept. 7, when the National Guard Reaction Force participated in a simulated scenarios which dealt with a public riot; a tornado touching down at the Wyoming State Fairgrounds, in Douglas; and mass casualties.

"It was good to work with the local incident commander in this exercise," said Capt. Terrance Bell, 133rd Engineer Company commander. "It's important for him to see how we will work with his folks if something like this should ever happen."

Kelly worked with Dalgarn and Converse County officials as part of his mission to augment local authorities with National Guard assets, if needed, when a crisis occurs. Kelly acts as a liaison between the Wyoming National Guard and the Wyoming's Office of Homeland Security, which represents the governor, and has the authority to deploy Guard forces, if needed, within the state.

Kelly makes clear that military services' role is not to take charge of civilian emergency situations, but to offer training services that are tailored according to community needs.

"Whenever we (participate in) an exercise with the county, it's based on what they're concerned about, whether they have a pipeline running throughout their county, or if they are hit by tornadoes a lot. It's based off what they deem the threat is to their area," he said.

He has visited with each Wyoming county and leaders on the Wind River Indian Reservation to discuss capabilities.

"In conjunction with them, we create a scenario," Kelly said. "We (create) a script about how they're going to run the exercise and the roles for each of the entities they want to train, such as their police force, their sheriff's department, and anyone else in the area they want to put in play. Then we figure out how we can incorporate the National Guard Reaction Force into the exercises." 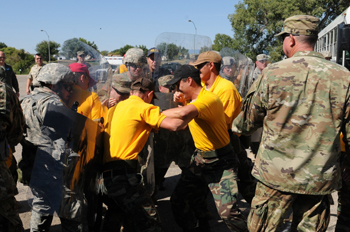 "The final result of all this work is the training for both the counties and the military," Kelly said. "Both sides come out more prepared by having (worked) together."

He added that although the counties manage themselves, they can request support from the Guard's reaction force, which is trained and equipped to support law enforcement, and work under the authority of the officers they support. They can be called on to provide security during disasters and civil-unrest. The 133rd Engineer Company based in Laramie serves in that capacity, having received its initial validation in May 2016.

Working with Converse County, Kelly found a way to integrate the engineers into September's emergency training by coordinated with the Douglas Police to provide the reaction force backup it needed for taming a crowd of rioters. The event served as re-validation for the 133rd.

"By all indications, the unit did an excellent job. It was cool to train on a task the unit normally doesn't do," Bell said. "It's important for the governor to have this capability and to have us trained for it so he can use us, if needed."