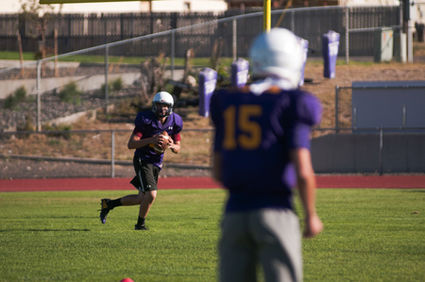 Donte Jacobsen (14) works on a passing drill with Reed Thompson (9) during a football practice Tuesday in Pine Bluffs. The Hornets will take on Big Horn at home 5 p.m. Friday in a state championship rematch.

Continuing their multi-season 19-0 winning streak, the team has put up another impressive streak: No points allowed through four games.

Last week, the Hornets traveled to Dayton and took on Tongue River, scoring 28 points to bring their scoring differential on the year to 120-0.

"(The defense takes) pride in not letting teams score. Coach (Brian) Anderson does a great job with the kids on that side of the ball," head coach Will Gray said. "He has them prepared well each week."

The senior also made it into the end zone twice for the Hornets.

Brian Steger also contributed a running touchdown. Steger was given 22 carries which were good for 115 yards.

Jacobsen found Seth Tangeman for his only touchdown pass of the night.

It's homecoming in Pine Bluffs, and the Hornets will play their biggest game of the year so far.

Ranked first in 1A East, Big Horn will surely be seeking revenge when they travel to No. 2-ranked Pine Bluffs.

But Gray said that hasn't changed his team's approach in practice this week.

"It's business as usual. We believe in preparing for every opponent the same way," Gray said. "It's hard to win if you have ups and downs in preparation. If you practice hard one week and not the next then you are not creating good habits for sports or life.

"Big Horn does a lot of different things on both sides of the ball so the attention to their details is increased more than other opponents, but the effort has to be consistent. They have great team speed, and are big upfront. They are a good team and will be prepared very well. We have to tackle well to keep them from gaining big chunks of yards, and we have to execute well to keep the ball our their play makers hands. I have no doubt that their kids will be ready to play after a long bus ride, we need to match their intensity and physicality."