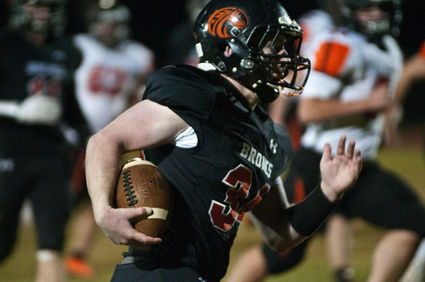 Burns' Boe Clayson rushes the ball for a touchdown during the Broncs' 54-8 rout of Newcastle Friday night at home. Clayson rushed for four touchdowns.

night on the gridiron.

Just look at the numbers.

The Broncs compiled 553 offensive yards while holding Newcastle to 269.

The average rush for the Broncs was 41 yards.

Quarterback Kaden Lakin contributed three of his own.

Joel Moraeles also ran his way into the end zone.