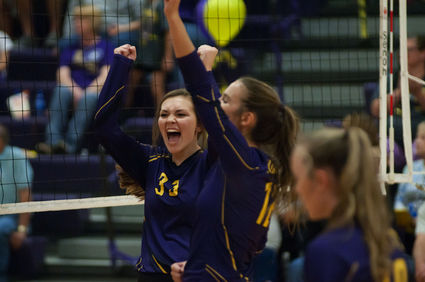 Dylan Sweeter celebrates a Pine Bluffs score during a home game earlier this season. The Hornets earned a state tournament berth this year, advancing to the championship round. They were defeated by Wright in four games, however.

The Lady Hornets came one match away from hoisting the 2A Wyoming State Volleyball Championship trophy over the weekend - but they were bested by a familiar foe.

They started things off b y facing third-seeded Wind River and won that matchup in three games.

"You never know how that first game will go with jitters and not being real experienced at the state tournament but they played well. We had some moments but played aggressive," said head coach...