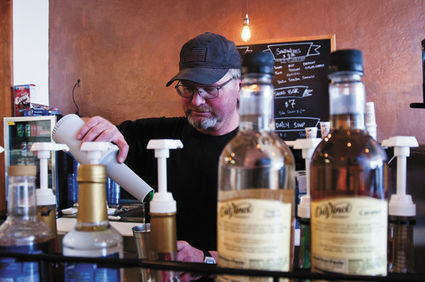 Cody Ipsen pours a coffee drink at the Butcher's Pantry in Burns. Ipsen and his wife opened the business earlier this year.

Jack Sr. was joined by Jack Jr. after he graduated from the University of Wyoming in 1970. At that time the Hockersmith's were running a 4 truck trucking line, feeding cattle on their property, and were part of a traveling harvest crew with around 4 or 5 different machines. After returning home from college Jack Jr ran into an old friend, who himself and his father worked for, Elmer Glaunse. Elmer asked Jack Jr. if he would like to farm his land, and with being married it was difficult to travel, Jack Sr. so Jack Jr. agreed. When Jack Sr. passed away at 60 years old, Jack Jr. took over and worked the company primarily by himself until Matthew Hockersmith was old enough to help out. Now the land that Jack Jr was farming later turned into his own and was strictly a family business

Hockersmith & Son is now a Farm/Ranch. They use irrigated and dry land for crops that include corn, alfalfa, and also beans. Alongside their crops they also have cattle. When Jack Sr. died, Jack Jr. sold their 100 head of cattle so he could keep up on the crops, but a few years ago Jack Jr. replaced the sold cattle. For their cattle they have 3 different brands in which Matthew is now being added to.

When the old Pine Bluffs Elementary School was constructed in 1961, a group of citizens had the foresight to leave behind a piece of history.

Last spring, during construction of the new elementary school, that piece of history was unearthed - but it almost went undiscovered for even longer.

No one seems to know exactly who placed the time capsule under the old school in August 1971. An article from the Aug. 17 edition from the Pine Bluffs Post found in the capsule mentions that the cornerstone for the then-new building was laid that week.

Laramie County School District 2 Superintendent Jon Abrams said construction crews found the container last spring, but it was placed in a school district storage garage to sit for another year.

"Someone said, 'Hey. We have something back here you need to look at,'" Abrams said. "I think it came to their attention when they were cleaning (the garage) out.

So Abrams and his colleagues headed to the garage and found a concrete plaque from 1961. Underneath it was the time capsule.

Last week, LCSD 2 school board members opened it during a regularly scheduled meeting.

Karen (McDowall) Waterman was in the first grade when the capsule was buried.

Back in 1961, she had no idea the capsule was buried. Waterman wasn't aware of its existence until recently.

And it was a trip down memory lane.

Browsing over the documents found in the capsule, Waterman recognizes a number of the names listed.

"This is Tri-County Medical Center," Waterman says pointing at an old picture. "My dad worked for the town. He got hurt when they were building that, so he was one of their first patients."

On the front page of the newspaper found in the capsule is an article detailing a head-on collision north of Rawlins a few weeks prior.

Then Postmaster W. Sheirl Brown, his wife and four children were injured in the accident.

"That was my aunt and uncle," Waterman said.

It was an emotional moment for Fornstrom, but for those who know him, it's no surprise that he's heading to West Point.

"The first time I visited with Wyatt beyond hello, he told me he wanted to go to a service academy," Jon Abrams, Fornstrom's school superintendent said. "For three years, I've watched him work hard and prepare for this day."

And while Fornstrom's selection at West Point isn't shocking for his peers and educators, the United States Army's service academy wasn't always on his radar.

Initially, Fornstrom wanted to attend the United States Air Force Academy in Colorado Springs, Colo., but after going to an "academy day" at Cheyenne Central High School, that changed.

"They told me if my whole goal is to serve this country in the military, just apply for them all and see where it goes from there," Fornstrom said.

Getting into a service academy isn't easy, with each major branch (West Point, the Naval Academy and Air Force Academy) having its own rigorous application process.

There's a medical exam. Then candidates have to apply for a U.S. Senate nomination. Even if they get a nomination from one of Wyoming's U.S. Senators, nothing is certain.

It's in the family.

Fornstrom has grandparents who have served, but it was interacting with his father's cousin that piqued his interest in joining the military.

"Growing up, he was kind of an older brother figure. He's a Black Hawk pilot in Hawaii," Fornstrom said of his father's cousin. "So I'm looking at going into aviation and flying helicopters."

He plans to be in the Army for at least 20 years - the minimum time to be eligible for retirement. After that, the natural leader wants to keep serving.

"I like the thought of serving my community and state," Fornstrom said. "You don't hear a lot of 18-year-olds say this, but I might run for mayor or governor. Maybe a state house seat."

When Fornstrom first visited West Point, he knew he was on hallowed ground. He understood that, even if he didn't get accepted, it was still an honor to be there. It didn't feel like a college campus.

Now that he's going, it hasn't sunk in.

"I'm ready. The nerves are a little high," Fornstrom said. "There's a lot of emotion going on, but it will be an experience I will complete if I truly want to."

Abrams, himself a retired Army lieutenant colonel, said it takes a special kind of individual to make it through the rigors of West Point - and that's Fornstrom.

"He knows who he is at the core," Abrams said. "That's going to serve him well. He does things the right way and does them for the right reasons. He's just a good person."

Whatever career path he takes, Fornstrom will graduate from West Point as a second lieutenant in the United States Army.

And though he may always be Wyatt Fornstrom, the kid from Pine Bluffs who was a part of two state football titles or the student who was involved in every activity you can think of, he's going to be Lieutenant Fornstrom to soldiers in four years. Maybe in 25 years, he'll be Colonel Fornstrom to thousands of service men and women.

Although the thought of being a West Point cadet and future army officer hasn't sunk in for Fornstrom, others see it as a natural fit for the recent grad.

"Col. Fornstrom wouldn't surprise me at all," Abrams said.