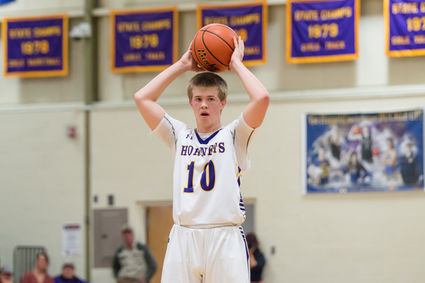 Andrew Fornstrom looks for a teammate to pass to during a home game earlier this year. Fornstrom shot a triple-double against Lusk last week, scoring 15 points, while contributing 11 assists and 10 rebounds.

The Pine Bluffs Hornets are now deep in the heart of their 2018-2019 campaign on the basketball court, but they only seem to be gaining more steam.

Just ask senior Andrew Fornstrom, who contributed 15 points, 11 rebounds and 10 assists for the Hornets against Lusk on Friday night.

That's good for a triple-double.

Since entering conference play Jan. 15, the Hornets have won three out of four of their games by at least a 10-point margin with the only game closer than that coming on a 60-56 win in Glenrock.

On Friday, the Hornets traveled to Lusk where they continued their theme of dominan...