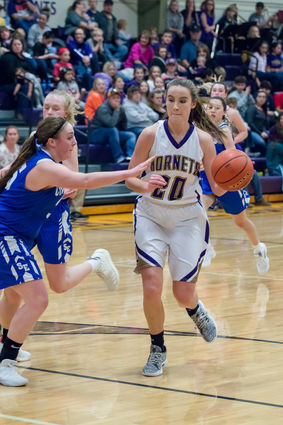 Kammie Ragsdale gets around an opponent in a previous game this year. Ragsdale scored 18 points against Lingle-Fort Laramie on Saturday.

The Pine Bluffs Lady Hornets traveled to Lusk this weekend and put on a show against niobrara High School.

They were led by senior Torri Long who scored 17 of the Lady Hornets' 54 points - nearly a third.

Friday's outcome never seemed to be in doubt with the Lady Hornets outscoring Lusk 12-2 in the first quarter and 16-2 in the third quarter.

The final score of Friday's matchup was 54-29 Pine Bluffs.

The Lady Hornets were back on their court Saturday afternoon to continue their momentum from the previous day's thumping of Lusk.