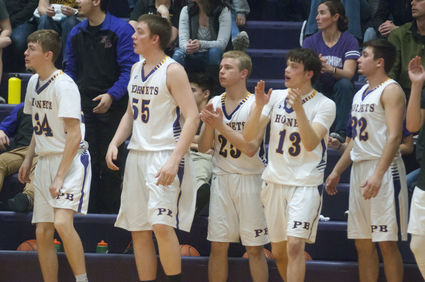 The Pine Bluffs bench reacts to a score late in the game Saturday while hosting Glenrock. It took Pine Bluffs all four quarters to secure a win against the Herders. The Hornets' final and largest lead didn't come until there was less than two minutes of play remaining. They hung on to defeat Glenrock 66-61.

The only score that matters in a basketball competition are the numbers on the board at the end of the game.

If the Pine Bluffs Hornets didn't know that already, they certainly learned it Saturday afternoon.

In a nail-biter of a matchup between Glenrock and Pine Bluffs, the Hornets needed every minute of play to secure a win at home.

And they did just that.

The Hornets spent much of the game trailing Glenrock with their deficit growing to 10 points with 40 seconds left in the second half at 29-19.

But then something happened in the second half: The Hornets came back to life.