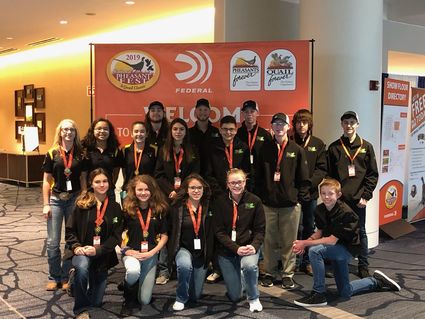 On Wednesdaym February 20, seventeen members of the Texas Trail Ringnecks, of Pine Bluffs, along with six advisors headed south to Denver, Colorado to the airport to fly to Shamburg, Illinois to assist the running of the Youth Village at the Pheasant Fest & Quail Classic. Pheasant Fest is a trade show that focuses on wildlife conservation, upland game bird hunting (pheasant and quail), dog training, and wildlife habitat management and restorationand was held February 22 - 24. In connection with the trade show, Pheasants Forever held seminars on habitat improvement, pheasant hunting, shooting sports, wild game cooking, dog training, and conservation.

The Youth Village booth consisted of wildlife identification and gun safety tips for all the attending youngsters.

One member of the local chapter is Kami Tangeman. She is involved with National Youth Leadership Council for Pheasants Forever. The National Youth Leadership Council is made up of 20 young people from around the country that were nominated by their chapter of Pheasants Forever or Quail Forever for their community involvement and conservation interests. 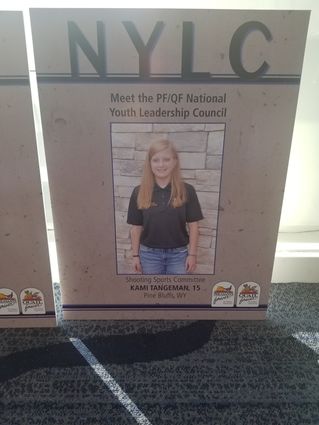 Kami Tangeman's board at Convention.

Members of the NYLC assisted in all aspects of the convention and stay busy throughout the year with Leadership Activities nationally.

There were over 22,380 people in attendance of convention. Sonny Perdue, of the United States Department of Agriculture was present and also participated in the activities at the Youth Village.

During convention several of the local members, along with Shooting Coach Joshua Tangeman attended the Shooting Sports Invitational Program held during the annual convention.

A special thank you was given to the High Plains Chapter of Pheasants Forever for sponsoring the Texas Trail Ringnecks and making it possible for the Youth Chapter to attend and assist at the Annual Pheasant Fest.