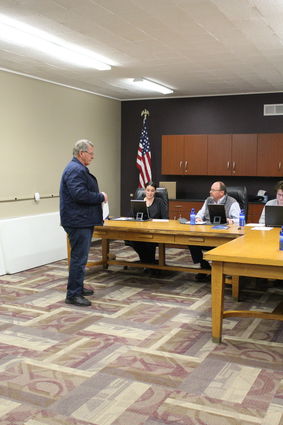 It was business as usual at the Pine Bluffs Town Council. Mayor Alan Curtis welcomed all present and started the meeting off with the pledge of allegiance.

The agenda was presented, and approved. The council discussed items on the agenda, minutes were approved, as well as the standard finances and payroll.

New business brought to the council was from Cub Scouts Pack 109, from Pine Bluffs. The pack is going to be holding their Pinewood Derby and have requested to use the community center. They were requesting usage in exchange for communtiy service of cleaning up downtown picking up litter, trash etc. The Pack is fairly new and have approximately 9 members. The council asks if they would require usage of the kitchen. Elizabeth Zerck, Pack leader, stated they would be having a potluck prior to the derby, but did not require the kitchen.

The council discussed the derby, and the usage of the community center and approved usage for Cub Scouts Pack 109.

Next Gary Roadifer approached the council asking permission to use park for the Pine Bluffs Lions Club 4th bike ride, the High Plains Ride for Sight.

The council approved usage and then adjourned for executive session.