Ed Thompson: From Hobby Gardner to a Great Business Gardner 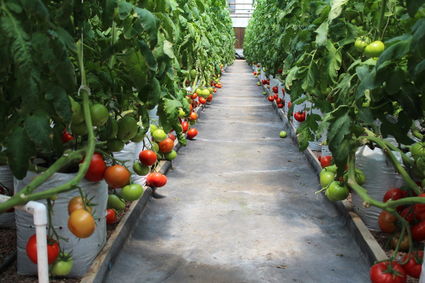 Above Ed Thompson's greenhouse at aisle one .

As far back as Ed Thompson can recall he has had a love for gardening. He enjoys the relaxation of gardening but now is reaping the rewards of all his tender care of his tomatoes.

Thompson obtained his greenhouse after the hail storm a few years ago, and began growing his hydroponic tomatoes from seeds. He does a hydroponic feeding system for the tomato plants in his hydroponic greenhouse and the end results have been nothing short of amazing.

"There is lots of pruning to be done, and I have done some grafting and the plants seem to love what I have done as they are growing tall and harvest is large natural tasting tomatoes." he said.

Thompson went on to explain about the seeds, to seedlings and to harvesting the fruit of his plants. (Scientifically speaking, a tomato is definitely a fruit.)

While there is a normal season for tomatoes, Thompson works his tomatoes pretty much year round. He starts with seeds in December, and come April-May time frame, these big red totally hydroponic beauties are so delicious, he has been known to eat one like an apple.

There are over six hundred plants in the greenhouse, which is temperature controlled for night at about 65 degrees, whereas in the day it is between 80-82 degrees. Depending on the season, the temperature is kept by heat or swamp cooler. It is constantly monitored for humidity to keep down levels of moisture to prevent blossom end rot.

Thompson, along with his employee, D'Nette Eastman monitor the PH of the water for acidity, and the temperature of the water as to not shock the plants. "Believe it or not, tomatoes are sensitive plants, and if the atmosphere is not right, it will reflect in tomatoes the plants bear." stated Thompson.

Once the tomatoes are harvested, they are put into a special room, which is temperature controlled as well, cleaned and ready for sale. Thompson's tomatoes are sold locally, Laramie and Colorado and Nebraska.

A sampling of his tomatoes and homemade tomatoes juice was enjoyed as this interview was held. Thompson shared an easy recipe for use of his tomatoes: slice them thick, brush with olive oil place on a cookie sheet, cover in Parmesan cheese and a dash of garlic powder and roast till cheese is slightly brown and yum!

Thompson's tomatoes are carried locally at the Texas Trail Market, and are known as Wyoming Tomatoes, LLC. 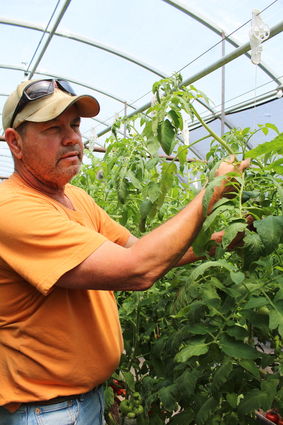 Above: Ed Thompson inspects his tomato plants for adjustment on strings holding them up.