Getting Muddy with Volleyball 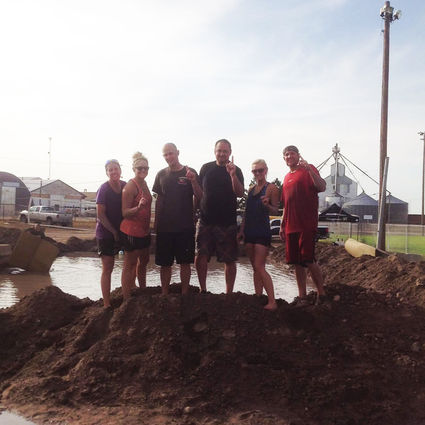 Above left: Winning team - "Off in the Woods" in the Mud Volleyball Tournament.

For the third year in a row "Off in the Woods" was able to pull out another win in the annual Trail Days mud volleyball tournament. A forty-seven game bracket in 90 plus degree temperatures made this no easy feat for the three time winners, but spirits were high, and everyone had a great time.

With a Bloody Mary bar that was almost a meal, and Silva's Traveling Grill and Catering providing everything from burgers and fries to tacos there was no lack of food and drink at the Pine Bluffs Distillery. Kids and adults alike were able to watch the mud fly.

This being their first year hosting the tournament, the distillery dug two large pits, plus a smaller kid pit, and the day was set for players and spectators. Although the volleyball pits were more water than mud, no one was complaining in the soaring summer temps. Although the games came to a halt for a short time due to lightning, for the most part the day went off without a hitch.

All in all the mud volleyball tournament was a huge success. It was apparent that everyone was having an amazing time, and several out of town visitors commented that they could not wait to come again next year. Kudos to all involved for making such an awesome day, and I for one, can't wait to play again next year!