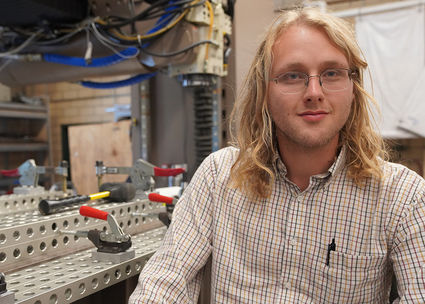 Above: Jack Carpenter, a Barry Goldwater Scholarship recipient at SD Mines, in the university's Arbegast Materials Processing and Joining Laboratory.

Carpenter is a 2019 Barry Goldwater scholarship recipient. The award is known as the most prestigious undergraduate scholarship in the natural sciences, mathematics and engineering in America. "I'm really thankful for a lot of people in the metallurgical engineering department and for the recommendation letters from my mentors NASA and Oak Ridge National Laboratory. This all gives me the confirmation that I'm on the right path to continue towards a Ph.D.," says Carpenter.

His desire to study at SD Mines started with a passion for aerospace engineering. "I wanted to work in aerospace, designing planes or rockets," says Carpenter. "But I found that the limitation is not imagination of the design, it's the things the parts are made of. You have to have materials that work, and I really like that practical challenge," says Carpenter.

While at NASA, Carpenter's work has centered around research in high temperature materials for nuclear thermal rockets. This kind of rocket could someday be used to enable human travel to Mars. Carpenter also worked in the failure analysis material science group where he utilized x-ray characterization and other tools to test and analyze friction stir welded or broken parts to understand how to avoid failure in future designs.

"Jack's recognition as a Goldwater Scholar is much deserved," says Jon Kellar, Ph.D., director of the Center for Security Printing and Anti-Counterfeiting and professor in the Department of Materials and Metallurgical Engineering at Mines. "He has had a broad number of research experiences with TU Darmstadt (Germany), the Department of Energy and NASA. In addition to Goldwater, Jack has been recognized by The Minerals Metals and Materials Society and ASM International through their scholarship programs."

Carpenter grew up on the eastern slope of the Big Horn Mountains in Wyoming. He says the hands-on experience he gained spending time on the family ranch and working towards a pilot's license gave him an ability to connect complex science and math concepts to the real world. His passion for science and engineering comes from a desire to do something positive during his lifetime. "I always thought that striving for something greater in life is a worthy goal. At the end of the day, I want to do look back and see that I did some work that made a difference," says Carpenter.

"Jack is a very humble student that is accomplishing great things not only in the classroom but also on the national stage conducting world-class research," says Michael West, Ph.D., head of the Department of Materials and Metallurgical Engineering at Mines. "He has had a great impact on our program and always has time to help his fellow students or use his hands-on skills to get the next generation of young students interested in science and engineering through outreach activities."