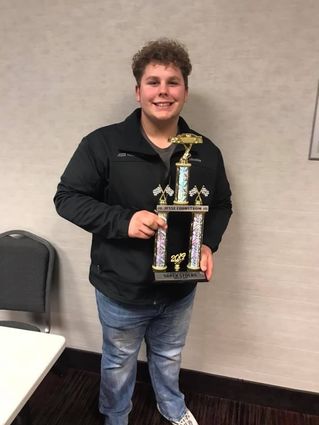 Jesse Fornstrom with his 3rd place trophy for the season.

Jesse Fornstrom, from Pine Bluffs is in his third year of Super Stock racing with Fornstrom Racing. He was bit by the racing bug through his Uncle Clint Fornstrom.

Fornstron Racing has taken him to raceways in Nebraska, Colorado and Wyoming.

Of the Fornstrom Racing team, Jesse Fornstrom finished the season off in 3rd place in Super Stock, while Tim Bland also finished 3rd in his class.

Fornstom plans on staying in racing and hopes to move up to Super Late Model Stock. He enjoys the building of the race cars from stripped frame up.

Fornstom is the son of Zach Fornstrom and Natacha Gaspar, an...