Wreaths Across America A Veteran Story 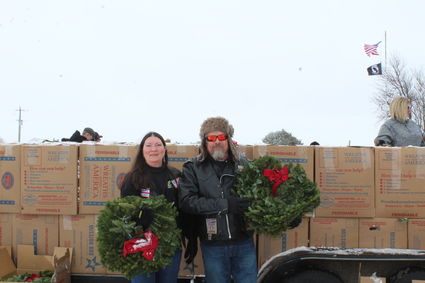 Above: T.J. Hobble and Gary Hobbs of the Patriot Guard Riders hand out wreaths to be laid.

Despite the blowing wind and the bitter cold, several people showed up this last Saturday to honor some of Wyoming's fallen veterans in the Wreaths Across America ceremony. While some worked diligently to brush the snow and ice away from the headstones, others placed flags throughout the cemetery marking the graves of the fallen. One by one approximately 1500 wreaths were laid in the Cheyenne Memorial Gardens to remember those that gave the ultimate sacrifice for this country.

The Worcester Wreath Company in Harrington, Maine found themselves with a wreath surplus in 1992. The owner, Morrill Worcester, remembered visiting Arlington National Cemetery and made plans to lay the extra wreaths in the cemetery at some of the older and less visited headstones. That year several volunteers stepped up to help place the wreaths. For 15 years this was a small ceremony held at Arlington National Cemetery until a photo in 2005 of the headstones in Arlington covered with snow and wreaths went viral. Suddenly thousands wanted to know how they could get involved and how they could do something similar in their own states. Wreaths Across America was founded in 2007 to help others remember our fallen heroes and to honor those who serve. Now the event covers all 50 states and in 2018 the organization was given permission to place wreaths at Normandy to honor those that died there.

The Patriot Guard Riders was founded in 2005 with the ultimate goal of protecting the loved ones of fallen service members from being harassed at funerals. They have chapters in all 50 states and are a 100 percent volunteer force. The Patriot Guard Riders are a non-violent completely legal 501(c) organization that has expanded their mission to include all veterans, first responders, and their families. This organization also actively helps with the Help On The Homefront program which helps veterans and their families. These men and women have ridden alongside some of our fallen heroes to their final resting places, and it seems fitting that they would spearhead the Wreaths Across America ceremony in Cheyenne this last weekend.

This year UPS sponsored the Wreaths Across America Honor Trailer. UPS hauled the trailer in the world's longest veteran parade. A convoy of vehicles made more than 2.5 miles of parade this year as they moved towards Arlington National Cemetery carrying over 50,000 of the over a quarter of a million wreaths that will be laid this year in Arlington. UPS has done so much for their veteran employees that it seemed fitting that they would carry these memorials for our fallen. 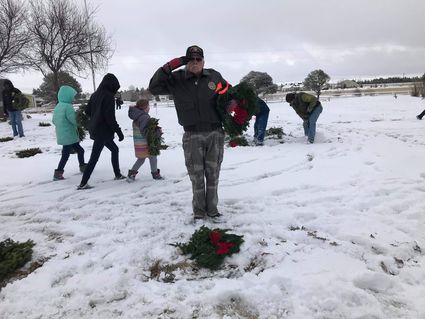 Above left: Veteran and American Legion member Chuck Chaires steps back and salutes a wreath covered headstone of a veteran.

Although the wreath laying is done for this year, please visit wreathsacrossamerica.org to find out ways that you can help in the coming years.