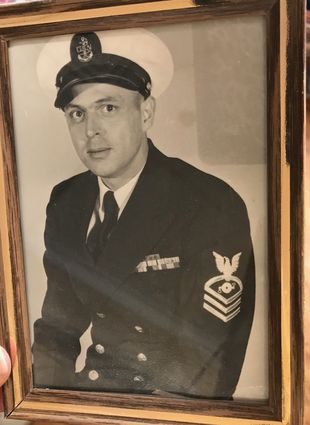 Roland Thomas, born September 25, 1922 in Chicopee Falls, Massachusetts entered the post office with full intentions of enlisting in the United States Army. He had graduated Technical High School and Cathedral High School and was now preparing to serve his country.

As he entered the post office, he had to pass by the U. S. Navy recruiter to go around the corner to the Army recruiter. He was walking by when the Navy recruiter asked him where he was going. "Going to go join the Army" Thomas said. "Well, he called me over, and I enlisted in the Navy!" He added. The year was 1940.

Thomas would go to basic training at Newport, Rhode Island. His first duty was aboard a ship - an old destroyer named the USS Perry EMS 17 that was commissioned in 1919 and was converted into a minesweeper, and he would find himself in Pearl Harbor, Hawaii.

Thomas was pulling KP duty in December 1941. "Everyone had to do their three months of Mess duty, and I would take the trays of food from the galley down to the compartment where everyone was served." He said. "That's what I was doing on December 7th, 1941." He added.

"As I headed down to the compartment I looked out and saw the hangar on Ford Island blow up!" Thomas stated. It was the start of the invasion and devastating attack on Pearl Harbor.

Shifting gears, Thomas would go from carrying trays of food, to carrying ammunition to the 50 caliber machine guns. "I was shot at a couple of times by Japanese planes as I was running with the ammunition on the well deck. Luckily, they missed!" He added.

"I presume the plane that dropped the bomb on Ford Island flew right over the ship!" He said, reflecting "I will never forget!" Thomas went on to add that at the time they were not trained to know what the Japanese air planes was..."I saw the red circle on the wing, but I didn't know who it. We had been trained on the German planes."

He headed back down to the compartment and told everyone they should come up because there were planes all over the place and they were dropping bombs and shooting things up! "I didn't know what was going on for sure, I was only eighteen then." Thomas exclaimed.

At that time general quarters rang, which was the call for battle stations. "My position at that time for battle stations was the ammunition hold. I spent the time running ammunition up to the guns." He said. "We all had anti aircraft duty if enemy planes were around; shore bombardment, we had to protect the Marines and everything on the beach!" He added.

Thomas went on to state that the fleet was 10-15 miles away. "They were not close by, we were so we had to protect them."

After all those island invasions we got tangled in the battle and fought for survival. The USS Perry would survive with just on casualty. After the attack on Pearl Harbor, the USS Perry would battle the Japanese throughout the Pacific before the ship was sunk in the Palau Islands.

Thomas would be re-assigned an aircraft carrier.

After the war, Thomas would find himself assigned to the Atlantic Fleet, - the 6th Fleet. "We were there for Europe for occupation...in the Mediterranean and I have been in just about every country in Europe."

Thomas continued talking about the things we would see in the war: death, destruction from the bombings and all.

"I have been to ports in Africa, France, Italy, Turkey, Spain and more." He stated.

Thomas would serve over thirty years in the Navy. "I re-enlisted many times." He said with a smile.

From the east and being aboard ships, Thomas would settle and become a long time resident in Cheyenne. He is, in fact the last Pearl Harbor survivor in Cheyenne.

After 30 years of service, Roland Thomas would retire in 1970.

Thank you Roland Thomas for your dedication and service to the U. S. Navy and America. 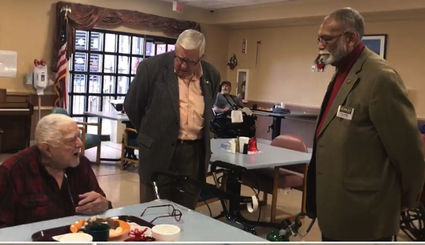 Above: WWII Veteran Roland Thomas talkes with Senator Mike Enzi and Foy Jolly about his time in the Navy and Pearl Harbor.