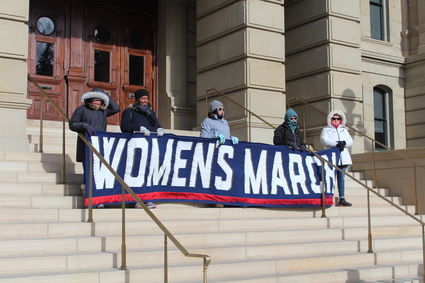 Top left: A group of women stand on the steps at the Cheyenne Courthouse holding the Women's March banner.

The theme for the fourth annual Women's March was "Women Rising". A platform for women to talk about the issues that they face including, but not limited to: reproductive rights, women's issues, LGBTQ rights, and as a first, Native American rights. This years theme encouraged women to get involved in more progressive movements and to seriously consider running for office. Lori Brand, the events organizer felt that the march was a perfect place to make candidacy announcements "Because you're going to get an upwelling of people that want to support you" she stated.

And announce they did. Merav Ben-David, a wildlife ecologist and professor at the University of Wyoming has been in the United States for thirty years. Originally born in Israel, Ben-David moved from Alaska to Wyoming in 2000 and is most proud that she became a citizen at the Cheyenne Courthouse. Ben-David is a Democrat and is running to fill the seat that will be vacated by Senator Mike Enzi, R-Wyo., in 2020.

Also announcing her candidacy was Democrat candidate for District 8 House of Representatives, Marcie Clark. Clark is a real estate agent in Cheyenne and a graduate of LCCC. Clark came to Wyoming from Utah shortly after her high school graduation and found that she was just as attached to the area as the natives. She is married with four boys and is looking forward to meeting everyone in her district.

Key note speaker for the event was writer and activist Ambreia Meadows-Fernandez. Meadows-Fernandez talked about the struggles of being a black woman in todays society. She talked about making a world that was safe for her son, for other mothers, and women to fight for justice and equality. "No one is listening to our stories" Meadows-Fernandez said and challenged those who attended to be more involved.

After the march there were several tables set up to recognize contributing organizers such as: Sharon Breitweiser from the National Association or the Repeal of Abortion Laws (NARAL) Pro Choice of Wyoming, Kristen Schwartz from the Wyoming Coalition against Domestic Violence, Danelle Hoyte from Hispanos Unidos, The Cheyenne Teacher's Education Association Diversity Caucus, Marguerite Herman from the Wyoming League of Women Voters, and Rob Joyce the Sierra Club Wyoming Chapter.

Representative Sara Burlingame, D-Cheyenne, spoke to the crowd as well encouraging women to stand up for the things that they believe in. Burlingame stated that although Wyoming celebrated 150 years of suffrage, true equality was still out of reach. "The story of Wyoming is the story of women, of trans women, of black women, of native women saying, 'if you don't make a place for me at the table, I'll drag my chair over.' That's our story."

Saturday the 25th of January will showcase the Pro-life march. Another opportunity for women to band together to stand up for the ideals that they believe in. The march starts at the Depot at 10 a.m. with lunch to be served afterwards.