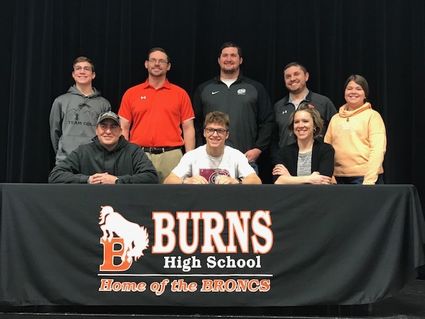 Burns Quarterback/Defensive Back Kaden Lakin has signed to play football with Chadron State College in Chadron, Nebraska. Kaden was a 3rd Team Super 25 Honoree as a senior, and a two-time All-State Football player for the Broncs. Kaden scored 47 Touchdowns and snagged 9 interceptions for the Broncs over his Junior and Senior season. Kaden helped lead the Broncs to 11 wins over the last two years (and Burn's first playoff victory since 2008) compared to just 3 wins his freshman and sophomore year.

Coach Brad Morrison had this to say about the now-Chadron State Eagle - "Kaden em...