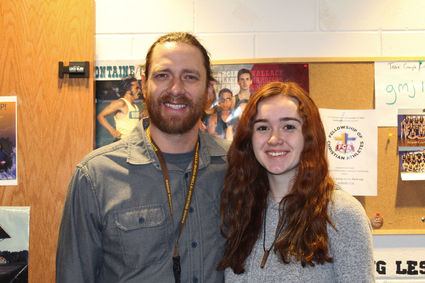 Above: Dustin Lee, head coach for track and Jourdaine Cerenil.

The 42nd annual Simplot games will be held in Idaho this year and one of our own will be there. For the first time Pine Bluffs will send a high jumper to the games. Jourdaine Cerenil and 23 other students from Cheyenne Central will head out this Thursday to compete in the three day event. In the Simplot tradition only the best athletes from the nation will compete in this second largest indoor track meet in the nation.

Cerenil received an invitation to attend the games for her high jump and her triple jump skills. "Jourdaine has continued her improvement in high jumping from last year. I look forward to seeing her continue to improve her performances as we compete in big meets, the Simplot Games and the State Indoor Track Meet. Jourdaine has shown what a good competitor she is and we hope she can help Central High School compete for a state championship at the beginning of March" Coach Mowry stated. Cerenil feels like she is prepared to show her continued improvement. "I'm already jumping at five feet and last year I wasn't at five until until state, so I'm already ahead of the game" Cerenil said.

I asked Cerenil if she was nervous about attending the meet and she seemed pretty cool about the whole thing. "I'm at a disadvantage because everyone else gets to practice everyday but since I don't live there I am only able to practice once a week, but I was pleasantly surprised to be invited for the triple jump" she said. Cerenil is slightly stressed about the amount of people who will be at the tournament, but is looking forward to getting her name out while there will be several coaches from various colleges watching.

As of right now Cerenil is planning on attending Chadron in Nebraska, but is open to being courted by other coaches right now it's more of a money game for Cerenil. Whoever will be willing to offer the best scholarships will win. Either way, being in a tournament this big will only help Cerenil. "I don't really have any expectations of placing, but I would like to get my name out there and I would like to at least beat my personal record even if I match my personal record I've succeeded for the season. Any improvement is improvement" Cerenil stated.

Cerenil's head coach here in Pine, Dustin Lee, feels the same way. "I've enjoyed coaching her, watching her develop, and get better. It hasn't always come easy. She's had to do a lot of work" Lee said. Although on the bright side, after this Cerenil is pretty sure that competing in the Simplot will make state look like no big deal. Coach Lee is pretty confident in Cerenil's abilities though and looks for her to do well. "I absolutely think she has great potential. This type of meet is where kids exceed. I won't be surprised if she goes above and beyond her own expectations" he said.

We here at the post are rooting for Jourdaine, and look forward to what she will accomplish.