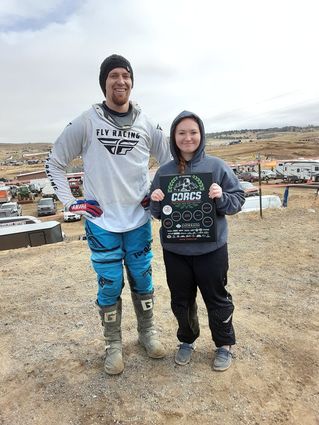 Above: Dirt bike racers - Nick Yelton and Anna Butler at the CORCS race in Colorado.

Nick Yelton, Social Studies teacher and coach at Pine Bluffs High School has rejoined a love of dirt biking. This time, he has taken it farther than a love to ride, but is now competing at races.

His first race has shown him his talent is there. Out of forty some racers, Yelton finished in 12th place in the C2 class in Colorado's CORCS race.

Yelton has been riding since college. He is a graduate of Dickinson College in North Dakota.

Anna Butler, a senior at Pine Bluffs High School, has a passion about dirt bike racing and even after graduation, she intends to still grow, and compete with her bikes. 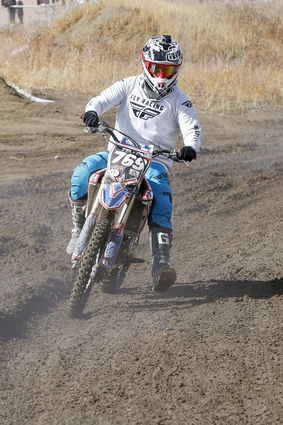 Butler has competed at The Kicker Arenacross series, which is a none point series the riders have to qualify to go to the championships which was in Amarillo Tx.. Anna went to Hbbs NM, Loveland Co, Denver CO, Gutherie OK, Salt Lake City and Amarillo TX.. She finished 3rd in the Womens class at the Championship.  The endro race at CORCS was the first time racing that type of race for her.  It was a hour and a half long race in which the track was 6 miles long.  She finished 3rd in that race.

Butler's plans after high school include racing and competing, but also intends on going to LCCC and obtain her degree in Radiology.

Butler, who resides in Carpenter, practices at home on her self made track. She is the daughter of J.R. and Tamara Butler.

Future races include the Penrose in Colorado and the Hare Scrabble.