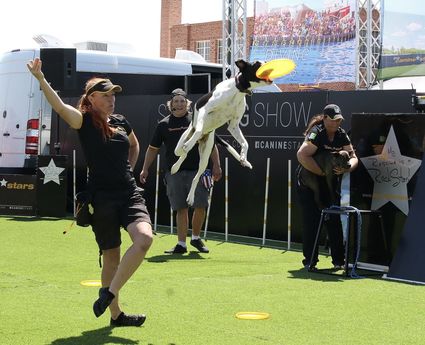 Above left: Zach, affectionately called "the anti-gravity dog" by the Canine Stars trainers, leaps into the air to catch a disc thrown by Keri Caraher, co-owner of the company.

It took a pandemic to make it happen, but a Pine Bluffs company that puts on shows of athletic exhibits by dogs finally got a chance to stage a performance for a hometown crowd at Trail Days.

The "Stunt Dog Show," a production by The Canine Stars, was the main attraction at city park on Saturday as dogs, many of them rescue animals, performed feats of athleticism such as long-distance diving, high-jumping and Frisbee catching.

The show's appearance was the result of The Canine Stars seeing all of their shows for the summer canceled because of the coronavirus, said company co-owner Keri Cara...