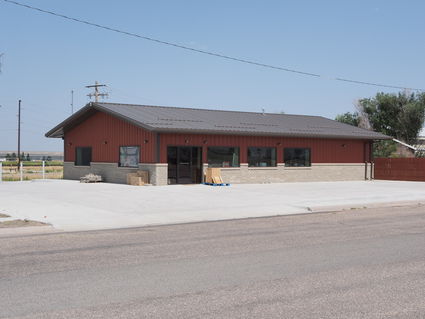 Above: Sadie's Cafe located at West 5th Street and Lincoln Hwy. in the building stages.

Sadie's Café LLC expects to have a soft opening Sept. 19 in preparation for a grand opening the first week of October.

Jeannie, Jack, and Matt Hockersmith have finished construction on their new restaurant and are ironing out the final details in the weeks leading up to its opening. They plan to be open from 6 a.m. to 2 p.m. serving breakfast and lunch, said Matt Hockersmith, who will be managing the operation.

Sadie's has indoor seating and will also accommodate grab and go customers in order to better serve the community and aid in adapting to any COVID-19 related restrictions that might surface.

Ronald Martinez, who previously worked at 307 Café, will be the cook, Kelly Gordon will be the baker, Veronica Gregory will be the service manager, and Matt Hockersmith will run the day to day.

"It's truly been a labor of love," said Matt Hockersmith. "[Jack] likes to do the woodwork, and last year we put the kitchen together. It's been a project that we've enjoyed putting together for the community."

Matt Hockersmith got his start in the food service industry working for Houston's-Hillstone in New York where he was a server for three years and a bartender five years.

Jack Hockersmith laid the groundwork for the restaurant several years ago, not quite knowing, until recently, what would come of it.

Jack Hockersmith and his friend, Mayor Alan Curtis, had formed a company called Westin. They started buying properties in Pine Bluffs, and Jack Hockersmith ended up owning the property at the corner of W 5th St. and Lincoln Highway. Hockersmith's friend, Kelly Strey of B&C Steel, convinced Hockersmith to let him construct a building on the property.

Jack Hockersmith, a farmer, planned to sell the building but a passion for woodworking found him putting up walls and insulation during his free time over the last two winters. Jack, wife Jeannie, and son Matt eventually got so far along in the construction that it only made sense to finish it, deciding in January to lean the design towards a restaurant to appeal to more buyers.

However, in March they decided to take on the restaurant themselves, naming it Sadie's after the family dog.

"We're pointing this towards the community, something they need and they'll use," said Jack Hockersmith.