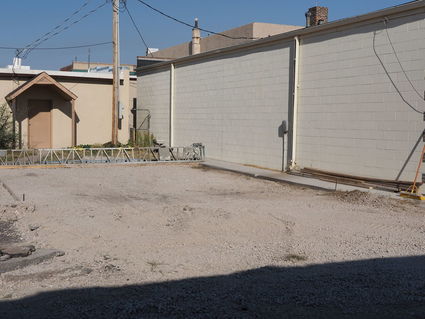 Above: Location for the new mural and courtyard is the backside of the Laramie County Library Pine Bluffs branch.

Construction began last week in preparation for a new mural on the back side of the library, completing the background section for Larry Silvey's Pine Bluffs Veterans Memorial and Community Plaza project which he undertook nearly three years ago in an effort to beautify downtown Pine Bluffs and honor America's service members.

The new mural will be called "Tribute to America's Fallen Heroes" and will feature scenes from Arlington National Cemetery, Tomb of the Unknown Soldier, and the raising of the flag on Iwo Jima, said Silvey.

"I first envisioned this to be a more sobering scene," said Silvey. "The first mural is more about America and I thought that it would be nice to have, in the background, a tribute to the fallen heroes."

In addition to the mural, the new area will have a courtyard with at least one picnic table, landscaping, and possibly a section of wall dedicated to Purple Heart recipients.

Paul Pederson, in conjunction with Visibility Signs & Graphics, out of Salt Lake City, Utah will be constructing the mural as a wrap and then transferring that to the library wall.

Silvey got the idea for the new mural in May 2020, thinking it would complement and expand on the current mural's theme.

"I went to the county's head librarian with the idea for the mural, she was excited about it. She took it on to the county commissioners who whole heartedly endorsed us using the back wall of the library," said Silvey.

Silvey started a nonprofit called Pine Bluffs Beautification and Memorial Fund to help organize and publicize projects such as his mural. The current committee members are himself, Brian Heithoff, and Kevin Marquardt.

Silvey says he originally got the idea for the murals and community plaza after being told to maintain his vacant lots which were becoming overgrown. He was driving through Wheatland, while considering his long term options for the lots, and noticed several statues. Silvey contacted the owner who provided him with the molds.

"I had the space and thought it would be nice for downtown. One thing just led to another," said Silvey.

The community plaza, and soon to be courtyard, are free for the community to use and reserve for events. Visit town hall for more information.