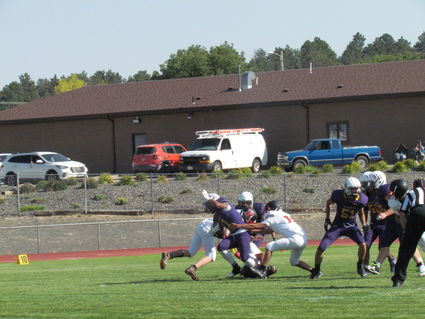 Above left: Pine Bluffs Hornets attempt to run ball down the field.

Pine Bluffs beat Riverside 16-6 for their first game of the season on Friday, Sept. 4.

"I thought we played well for the first time out," said Will Gray, head coach. "We left several scoring opportunities out there and had some missed assignments upfront, but we will get those fixed."

The Hornets had 95 rushing yards and 186 passing yards.

#12 Stu Lerwick completed 8 of 16 passes for 178 passing yards with no touchdowns or interceptions and #7 Marvin Reza completed 1 of 1 for 8 yds.

"Defensively we tackled well, with the exception of two runs," said Gray.