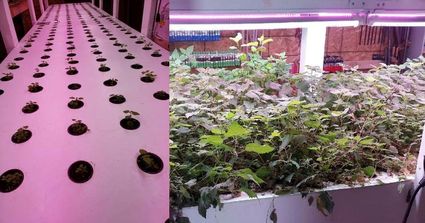 Stinging Nettle could easily be called a Prince among weeds. Not a very illustrious title, but it fits. If you've ever come in contact with the plant then you've experienced the burning, stinging affect that it has on human skin. It can be much more than just irritating. Then if you've ever tried to get rid of a patch of stinging nettle you realize just how tough and persistent, color that word to mean invasive, it is. On the other hand, if you've used stinging nettle for it's health benefits you have an entirely different opinion of the plant. Like I say, a Prince among weeds.

The stinging nettle plant is found worldwide in many different environments. It's surprisingly hardy. When I was growing up in Florida nettles were all over and we did everything we could to avoid them. When I came West, I figured I'd left them behind. Oh no. With over 50 varieties of stinging nettle, there's just about one for every climate in the world, except Antarctica of course. We even have it here. The sting comes from very fine hairs on the leaves called trichomes. These hairs are hollow and filled with caustic chemicals such as histamine, serotonin, and acetylcholine. When you touch the hairs they break off and stick in the skin like a hypodermic needle while the shaft acts as a syringe delivering the chemicals into the body. Unless you have a particular sensitivity to the chemical cocktail, it's only an irritant and won't do any true damage. But, yes, it does burn pretty bad. The reactions vary among individuals and may consist of pain, redness, swelling, itching and numbness. That could be intentional though since the cocktail has also been shown to reduce pain from some conditions such as arthritis.

Growing nettle is pretty easy but getting rid of it is a different story. The plant can reach over four feet in height and the roots can be even longer. Although it spreads primarily by seeds, I've had some plants come up in the hydroponic trays from the root. One of the interesting things about hydroponics is that you can open the top and see what's going on with the roots of your plants. It was interesting to see stems coming off the roots and growing in the nutrient solution. The seeds themselves are highly prolific and mature long before the plant reaches its full height. And they're tiny, almost too small to see. Once they drop you'll have new plants coming up.

I mentioned in the opening that stinging nettle also has health benefits. That's very true. And, by the way, it's easy to harvest. Just wear gloves and something to protect your arms and body. I cut the legs off an old Tyvek jumpsuit and made a smock out of it. Once the nettle has dried for about two days it loses its sting. So you can harvest and process your own with little difficulty. Stinging nettle has been studied extensively by the Dermatology Department at the Penn State University College of Medicine and the University of Maryland Medical Center. They've found that both the aboveground parts and the underground parts have health benefits. The aboveground parts aid in allergy relief and some other breathing related conditions. The underground parts (roots) aid in relieving urinary conditions and enlarged prostate.

Nettle contains chemicals that affect Benign Prostatic Hyperplasia (BPH) which is the primary cause of an enlarged prostate. The root extract has been shown to inhibit the growth of prostate cancer cells. Often it's used in conjunction with herbs such as Saw Palmetto to reduce the odds of prostate cancer. Saw Palmetto was actually prescribed to me by a Urologist several years ago. Now I just need to add a stinging nettle tea. It is also beneficial in alleviating urinary tract infections and as a general diuretic.

Arthritis and joint pain is where I personally use stinging nettle. Of course, since I grow and harvest the plant I'm often in contact with it. My right thumb has arthritis pretty bad and I've found that after working with the nettle and getting it on that joint, it will feel better for a while. Nettle is often used along with drugs such as aspirin to alleviate pain without the side effects of the synthetic drugs. A study published in the Journal of Rheumatology advocates stinging nettle's effect on rheumatoid arthritis.

Another of stinging nettle's anti-inflammatory properties is in the prevention of hay fever. It almost seems odd that histamines are used to treat allergies since they're caused by histamines, but it works. Allergy drugs also contain histamines. The National College of Naturopathic Medicine found in a double-blind, randomized study that stinging nettle rated higher in allergy relief than placebo.

Stinging nettle powder can also be used as a styptic. That means it can help control or even stop bleeding. Used in combination with other herbs, it has been used in surgery to reduce bleeding for quite some time. After processing stinging nettle, I can easily see how packing a wound with it would control bleeding.

A couple of forms of stinging nettle are used to treat eczema. The product is made into a tea and taken internally to fight the condition from within and it's also used in creams to spread directly on the affected site. The cream helps the rash and itchiness. The antihistamine and anti-inflammatory properties reduce the overall effects of eczema.

There are several other studies currently on-going to learn other medical uses of stinging nettle. The plant is showing promise in a number of areas. One of the major studies concerns controlling blood sugar in diabetes patients. This would be a major step forward, especially if it could be taken as a tea instead of by injection. It will be interesting to see the results once the studies are complete.

I forgot to mention that stinging nettle fiber is so tough that it was used by the Germans in WWII for fabric. I can attest to how tough the roots and stems are after processing several pounds of the plant. But the Germans were only following in the footsteps of their ancestors since stinging nettle has been used to make cloth and paper-like products since Neolithic times. Since the stem is hollow, it's also a good insulator. As I said, a Prince among weeds.

You can buy stinging nettle tea at most health food stores or find someone locally that produces it. As in any plant, the fresher the better. Or, if you have stinging nettle on your property, it's easy to make your own. If you have any questions about growing and maintaining plants ask a Master Gardener. It's what we do.