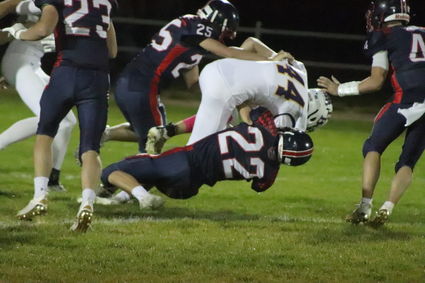 Above left: No. 12 Stu Lerwick tackles the quarterback and gets a forced fumble and recovers the ball for the Hornets.

The Pine Bluffs Hornets varsity football team played Lingle-Fort Laramie last week at Lingle, beating them with a score of 61-19. Pine Bluffs coming out and holding a lead the whole game, started with the first quarter which ended with the Hornets up 20-7, second quarter brought the score to 40-13, the third quarter bringing the score to 46-13, and ending the game with 61-19. Offensively, Pine Bluffs had a total of 412 yards with 8 touchdowns. Quarterback Stu Lerwick #12 had 3 passing touchdowns and a total of 232 passing yards. Receiving for Lerwick were Reed Thompson #6, who caught 6 pass...