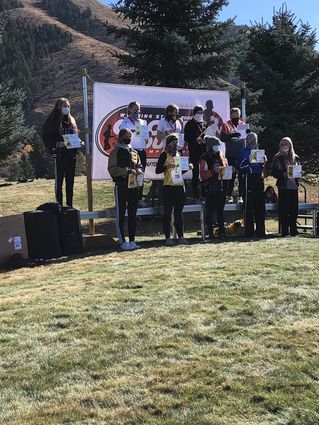 The Pine Bluffs/Burns Cross-Country team headed back to the arctic tundra of Afton, Wyoming for 3A State Cross Country this year.  State was split into three separate races in three separate cities in Wyoming this year due to COVID-19 protocols.  2A was hosted in Douglas and 4A was hosted in Casper.  Both 2A and 3A were shifted to Friday instead of Saturday to help the runners have better weather to compete in. The Team took two managers, 7 State competitors for boys and girls, and 2 alternate runners. The team had their FIRST EVER All-State 3A runner: EMMA GONZALEZ!!! She placed 8th and rocketed towards the finish!! That a girl!! Our girls had an emergency (masked up) hug at the line.  It was the best way to start the race.  Our hearts and bodies were warm before that attacked the course! Our team was two seniors (Layne and Shelby), four juniors (Austin, Kamber, Grace, and Emma), and one freshman (Jordan). Running in 3A has been a challenge, but Emma (20:40) rose to it! She told me she manifested her time and she was ready to run!! Our girls all ran amazing!!! Layne (22:06)and Jordan (22:09) worked together and nearly finished together too, which was the same case with Grace (23:54) and Shelby (23:55) too. Austin (26:53) and Kamber (27:05) are going to add so much to the ladies team next year--both ran amazing races too. The boys were ready to rock after watching our girls show they can leave it all out on the course. Our team was young and old--seniors Colby, Greg, and Scott followed by the sophomores Logan, Beckett, Dylan, and Austin. These boys want to push themselves to be a great runner, but also have fun while doing it.  When I was checking numbers today Greg said "I am not going to wear my watch today. I am just going to run my race, I don't want that pressure."  No pressure needed for this 6-year runner, for his final race I wanted him to have fun! I think they all did.  Colby (18:52) and Greg (19:47) left it all out on the course--those boys had a great final race!! Our sophomores are always wild cards.  These boys run together, race each other, and tease with the kindness of teenage boys---Dylan (21:46) had so much to give at the finish and only beat Austin (21:49) by seconds. Logan (23:10) and Beckett (26:25) were battling it out with Rawlins and Wheatland the whole race--both had great finishes!   Although Scott was a first season runner and a first season state racer he did well.  As a senior joining a new sport and increased pressure of being a senior he continued to cut time each meet, he finished state with a 27:33.This season has looked a little different and our kids' smiles have been covered for COVID-19 protocols, but we are so proud of these kids. They are the reason to keep coming back year after year.  Purple and orange have never looked better together!! Thanks for all the love and support this year and we will see you out on the course next Fall in Cheyenne! 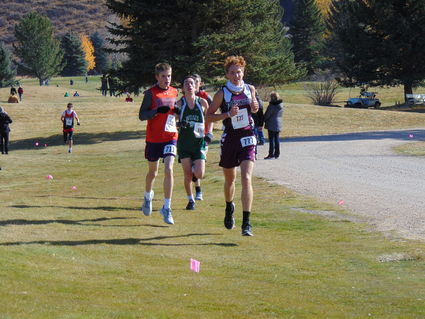