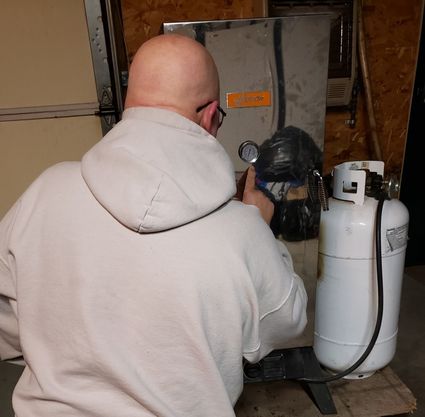 Above: Mike Heath setting up the smoker.

This is the time of year that we break out the pots and pans, those special cooking machines, our best dishes and get ready for huge feasts, celebrations, and the great company of family and friends. This year may slow us down a little, but I suspect not very much. A number of annual gatherings, mostly business and commercial, have been cancelled or scaled down, but we are Wyomingites. There's not much that will keep us down for long. We'll just take precautions and press forward with life. That means cooking. A lot of cooking.

I've always enjoyed cooking but I've seldom had time to stop and try the myriad of recipes and ideas that I've picked up over the years. Now with the Internet, the recipes available are almost unlimited. This year I did get a chance to smoke a turkey breast and a ham for Thanksgiving. And I've been doing a lot more on the grill and with the smoker for the last few months. Most of all I love to experiment with different ways to flavor meats and vegetables. Brown sugar, herbs, and honey are my favorites. But I've been extremely limited on my herbs. I've tried injecting meats, basting, rubs, barbeques, name it and if it looks like a good mixture I'm game. I've done a lot of barbeque in the past, but this year I've branched out.

This Thanksgiving meal started off with my dislike of turkey. It's a meat that I've never been fond of and usually do all I can to avoid it. Yet, every year we seem to end up with a turkey. My younger son started frying turkeys several years ago and has gotten pretty good at it. He uses a basic garlic and butter injection that gives a good flavor to the meat. Coming from me, that's a high compliment. I usually end up frying turkey leftovers and drowning them in ketchup just to get them down. His deep fryer recipe allows me to eat turkey without the added lake of condiments. The unfortunate thing is that his recipes are reminiscent of old farm recipes. A pinch of this, a pinch of that...what's a measuring spoon? His food is always great, but it's never quite the same. But he did get me thinking this year. He wasn't available to fry a turkey so we got a rolled turkey breast instead. Now I had to come up with a way to cook it that I could tolerate. Thank God for the Internet. None of my cookbooks (and I have several dozen) had any recipes for turkey. Chicken and game birds, yes, but no turkey. I did, however, find several recipes on the Internet that looked good. I'd already decided that I was going to smoke the turkey simply because of the wonderful flavor the smoke gives meats. For this recipe I decided to use primarily cherry wood with a couple of chunks of hickory thrown in. Cherry gives a little bit sharper flavor and the hickory is very mild and woodsy. This was my first real foray into cooking primarily with herbs.

The recipe employed a variety of herbs that are used extensively in the Mediterranean area. Since I spent 18 months in Greece, I'm somewhat familiar with the flavors. My office receptionist was Italian and she and her husband had me over for dinner quite often. She cooked in the old fashioned Italian method, nothing like the Italian food we enjoy here in the States. Everything was seasoned with herbs and with a wide variety of herbs in every dish, not just one or two. That's why this recipe was so appealing to me. I'll be branching out to use more herbs in the future. The recipe called for a mixture of olive oil, Worcestershire Sauce, salt, garlic powder, onion powder, ground bay leaf, thyme, sage, and black pepper. The cooking time is described below since I cooked it with the last ham. I have never in my life eaten turkey that was this tender or flavorful. Everyone at the table was cutting it with a fork, even across the grain. I finally found a turkey recipe that I actually like, all based on herbs.

I also smoked a ham. Now I've been smoking hams for the last few months as we clean out the freezers for the incoming meat shipment. FYI. We buy most of our meat from local ranchers and farmers and have it custom cut. It's cheaper and the meat is finished just the way we want it. This year I had an excess of hams to clear out. I've used three different recipes. Two used a basic Texas-style barbeque rub with a brown sugar and honey injection and glaze. The only difference was the honey. The first one I smoked used huckleberry honey and the second used off-the-shelf honey from Walmart. Both turned out great but the huckleberry honey has a very intense flavor that showed up in the meat. For the injection I used one cup of brown sugar and two tablespoons of honey. I added just enough warm water to thin the mixture and blend the sugar and honey together. There were still granules of sugar in the mix but that's okay. I injected this mixture throughout the ham so that all parts were penetrated. Then rubbed in the Texas-style rub thoroughly all around the outside of the meat using heavy pressure so that the rub pretty much dissolved into a paste that coated the ham. Then I let it sit in the refrigerator for three days before cooking. After adding the water soaked wood chips (24 hours) I cooked the hams at 150 degrees for six hours. The last two hours of cooking time I bumped the temperature up to 185 degrees and left the hams in until they reached 165 degrees internal temperature. That last bit of time could vary depending on the outdoor temperature. Just make sure that meats reach 165 degrees before serving. The glaze went on as soon as the ham came out of the smoker and was sliced. I just poured it over everything. It was the same mixture as the injection but this time I boiled it to completely dissolve the sugar and give it a thin consistency that flowed evenly. The end result was a tender, flavorful ham that could be cut with a fork. The key to the tenderness is the cook time and temperature. It could legitimately be called "melt in your mouth". The last ham I smoked I left off the barbeque rub. It was still good, but I think I'll go back to the rub. It was a lot better.

I also tried grilling asparagus. I made "rafts" by sticking toothpicks through five spears. That made them easier to turn and kept them from falling through the grates. This was a very simple recipe. While the asparagus was grilling I coated it with an olive oil and soy sauce mixture with just a touch of salt and pepper, then sprinkled it with sesame seeds. It takes about 2-4 minutes per side on high heat. Asparagus has to be served immediately after coming off the grill because it cools down quickly. It's much better hot.

I'm going to keep experimenting with herbs, even in breads. I only wish I had ventured out sooner. Now I realize what I've been missing. If you're interested in using fresh herbs instead of store-bought, growing herbs is very easy and can be done in the house. There really is a big difference in taste. Home-grown herbs can be harvested for a long time before replacing the plant. Just always leave two thirds of the leaves on the plant. If you have any questions, ask a Master Gardener. It's what we do.