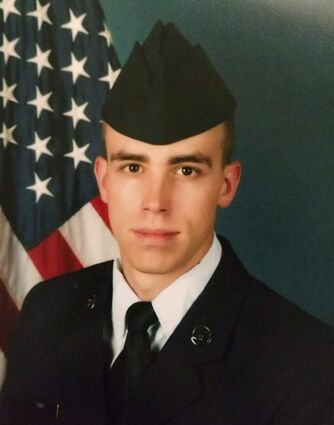 Above: Airman Basic Layne Ring upon completion of basic training.

A1C (E-3) Layne Ring on a recent trip home to visit his mother, and his family, before heading to his new base in Japan.

Ring was born in Kimball Nebraska on January 17, 1994 to Tricia Ring, but resided in Pine Bluffs.

Ring and his family would move in 1996 to Algoma, Wisconsin, where he would start school and reside for several years.

Due to jobs, his family would move a couple more times, until they settled in Illinois. Ring would finish school there and graduate from Mattoon, Illinois High School in 2013.

After high school, his family would return to Pine Bluffs. Ring would go to work,...