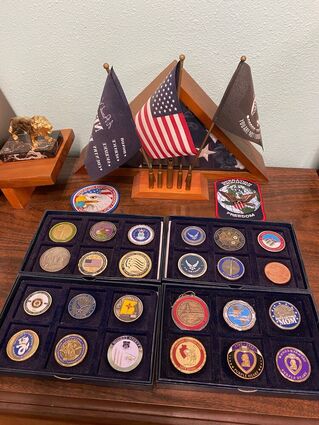 The Origin of Military Challenge Coins

The most commonly held view is that the tradition of the military coin began in the United States Army Air Service (a forerunner of the current United States Air Force).

Air warfare was a new phenomenon during World War I, when the army created flying squadrons and manned them with volunteer pilots from every walk of civilian life. Most pilots were wealthy Ivy League students who were drawn by the adventure and romance of the new form of warfare.

One Ivy Leaguer, a wealthy lieutenant, ordered small, solid-bronze coins struck, which he then presented to the other pilots in his squadron as mementos of their service together. This military coin was gold-plated, bore the squadron's insignia, and was quite valuable. One of the pilots in the squadron, who had never owned anything like the coin, placed it in a leather pouch he wore around his neck for safekeeping.

A short while later, this pilot's aircraft was heavily damaged by ground fire, forcing him to land behind enemy lines and allowing him to be captured by the Germans. The Germans confiscated the personal belongings from his pockets, but they didn't catch the leather pouch around his neck. On his way to a permanent prisoner of war facility, he was held overnight in a small German-held French village near the front. During the night, the town was bombarded by the British, creating enough confusion to allow the pilot to escape.

The pilot avoided German patrols by donning civilian attire, but all of his identification had been confiscated so he had no way to prove his identity. With great difficulty, he sneaked across no-man's land and made contact with a French patrol. Unfortunately for him, the French had been on the lookout for German saboteurs dressed as civilians. The French mistook the American pilot for a German saboteur and immediately prepared to execute him.

Just in time, he remembered his leather pouch containing his military coin. He showed the coin to his would-be executioners. His French captors recognized the squadron insignia on the coin and delayed the execution long enough for him to confirm his identity. Instead of shooting him, they gave him a bottle of wine.

During World War II challenge coins again proved their worth in identifying friendly personnel from "Nazi Infiltrators". Members of the Office of Strategic Services who were deployed in Nazi held France were issued coins known as "Bona Fides" during meetings to verify a person's identity. Certain aspects of the coin in the meeting were inspected such as the type of coin, date on the coin to ensure the meetings were not compromised. By using the coins it ensured that no spy that had knowledge of the meeting times and place could infiltrate the group and report their findings back to Germany.

The oldest challenge coin known in existence is that of the 17th Infantry of Korea commanded by COL "Buffalo Bill" Quinn. These coins were made during the Korean War and were given to its members from 1950 to 1951 to mark their tour together. On one side of the coin is a picture of a buffalo with the date 1812, which signified the year the unit was formed. On the other side was the 17th Infantry patch with the dates 1950 – 1951 and the word Korea to signify the tour. The cross and fort icon represent the units heritage which started in Cuba during the civil war. This coin is recognized as one of the oldest and most valuable challenge coins in circulation. Very few remain available and most are thought to be in private collections.

The Vietnam War began with bullets being used instead of challenge coins. "Bullet Groups" were formed by highly trained soldiers who fought in the front lines. Bullets were carried in the soldiers' front hip pockets. The use of these bullets were double sided- on one hand, soldiers could use their bullets to prove they were a part of the U.S. Military. However, they also served as a mortal insurance policy. Knowing that they faced torture and unwilling to divulge information that would risk the lives of their brothers on the battlefield, a soldier would save their bullet for themselves in the event of impending capture.

These bullets would be used to play the challenge game with their comrades. However, the longer they were used, the higher the caliber the bullets became. Soon, bullets turned into grenades and mortar rounds, which became problematic to slam onto a bar counter. The challenge bullets were soon exchanged for challenge coins, often customized with the soldiers' unit name, symbol, and oftentimes their own name as well.

In another popular story the oldest special forces unit in the Army, the 10th Special Forces Group had coins created for their entire unit to prove membership since it seemed everyone was claiming to belong to this elite unit. If you were telling a story about your time in the unit and could not produce your coin to prove it, the soldier had to pay for a round of drinks and was escorted off the premises.

In modern times Army challenge coins are presented to unit members and special visiting officials to show appreciation for their support, a job well done, boost morale and to reward service members for going above and beyond their peers.

Challenge coins today have spread to other military units and every branch of the service. Airmen upon graduating from the Air Forces top schools are presented a coin and in the Marine Corps the "Commandants Coin" is the most sought after coin for display.

Since then, military challenge coins have taken a specialty turn. Such as the coin for a Purple Heart.

Not only are coins available for family members of the military, but they have found their way into other line of professions. One such coin was presented to a mom of a child in the military.

Coins may be designed and used in other professions such as law enforcement, fire and rescue, military organizations such as The American Legion, or The Veterans of Foreign Wars (VFW).

Politicians also have jumped on the Challenge Coin Band Wagon and have presented veterans with their coins of their office. Even the White House has had presidential coins minted for each incoming president dating back to Ronald Reagan's time in office.

Veterans hold dear the tradition of the coin, and the pride in which they were earned.

Thank you all for serving. 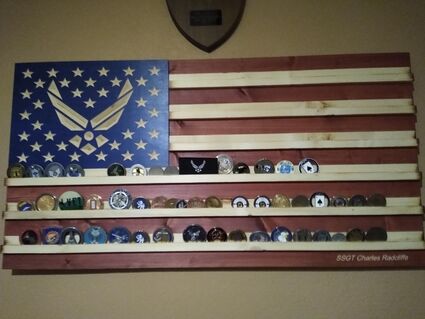 Above: The Challenge Coin display of Chuck Radcliffe, Ret. A.F..