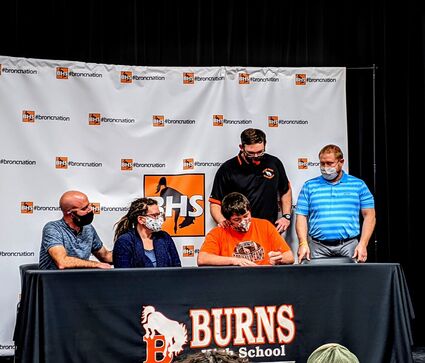 Above: Mr. and Mrs Siebert watch as their son, Lincoln Siebert signs his letter of intent to attend Northwestern College. Football coach - Brad Morrison and Wrestling coach Dan Clayson are there in support also.

Burns High School senior - Lincoln Siebert takes a step for his future and signs his letter of intent for college after graduation.

Siebert after some serious consideration decided to go to Northwestern college, in Orange City, Iowa.

"It is similar to the small town I have grown up in, it is a christian liberal arts college and is close to family for me." Siebert stated.

Siebert has been in sports during his high school career - football and wrestling. At Northwestern, he will play football and be on the wrestling team.

He plans to major in secondary education and minor in history.