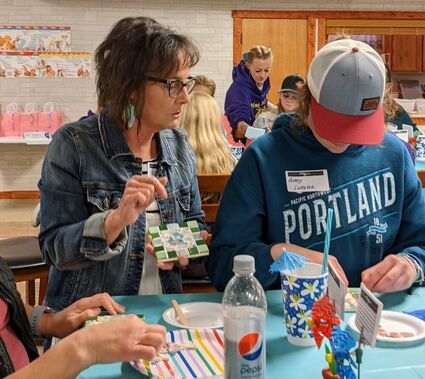 Above: Colleen Wilkins gives instructions to Avery Sweeter on her tile.

Hope is the theme for Crossroads Girlz Nite on Wednesday April 21,2021.

Girls giggling and talking is what you hear as you go in the basement of the church. About twenty-two girls filled three tables along with two adults set up for a craft project.

They were listening to Colleen Wilkins, who was instructing the girls on their first steps of the project tiles. Each tile had a heart and broken pieces. The broken pieces represent the difficult times in a person's life. The heart is placed in middle for stability - the broke pieces are arranged around it.

Returning to the project, the girls put grout on the tiles to hold everything in place.

In the meantime, Vicki Schinzel gave messages of hope with scripture. Following with true story of Joni Eareckson Tada. How a normal teenager had an accident and was paralyzed from the neck down.

The girls finished their craft by cleaning their tiles.

Schinzel started this nite for the girls because she learned at a meeting how suicide rates are up in young girls. She had strong passion through hearts to get a message out.