Comedy Nite at the Knotty 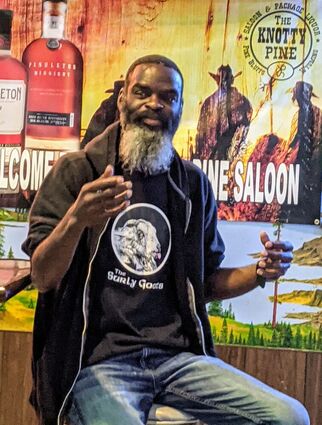 Above: Comedian Rio Hillman brings laughter to the crowd

Laughter rolls in at the Knotty Pine in Pine Bluffs. May 8th Rio Hillman put on his comedy act. Hillman wanted to do comedy after going a comedy show with a friend. He when doing comedy for 15 years

First partime, then decided to take it to a full time job. Hillman started at Chicago

with stand- up clubs and open mic nights. His style is call back jokes. It is a joke that refers to one at the beginning that were told. He feeds of the audience. Some

of the material he had about other night were roads signs from different state to gorillas.

Hillman started have up and down show all the time....