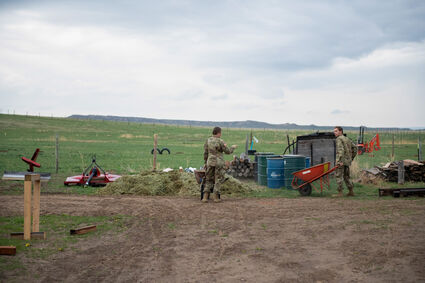 Above: Staff Sgt. Felicia Holbrook and Pfc. Brandon Miller help clean out the horse barn at the Mirrored K Legacy Ranch in Jay Em, Wyo., on May 15, 2021. Holbrook and one of her Soldiers volunteered to help prepare the grounds for the upcoming program start for Operation Remount, a veteran and first responder program to help participants with post-traumatic stress disorder or traumatic brain injuries.

JAY EM, Wyo. – It was an overcast and drizzly day on Saturday for Staff Sgt. Felicia Holbrook and her soldier Pfc. Brandon Miller. Holbrook is a recruiter in the Wyoming Army National Guard's Recruiting and Retention Battalion. Miller is one of her Recruit Sustainment Program soldiers. The two arrived at the Mirrored K Legacy Ranch in Jay Em, Wyoming, to start their day helping clean out the horse barn in preparation for a program called Operation Remount.

Originally, there were supposed to be several other recruit soldiers and cadets from the Wyoming Cowboy Challenge Academy to help out. Due to unfortunate events, only Holbrook and Miller were able to make it.

The ranch is owned by Kelly Alexander and the program is run by him and his family. Alexander is a veteran who served over 20 years in the Army and Army National Guard. The program stemmed from his own experience with post-traumatic stress disorder, as well as multiple traumatic brain injuries.

After trying several different programs to get treatment, he came across a program in Texas called Veterans and Mustangs through the Mustang Heritage Foundation. It was there that he found the tools needed to find the way back to his normal self.

"When it comes to heart, mustangs have it, hands down." Alexander says. He wants to duplicate his experience and allow veterans who suffer from traumatic issues like PTSD to find their way back as he did.

Operation Remount is a 6-week program that pairs the participant with a wild mustang. Wild mustangs also experience trauma when they have to be pulled away from their herds and placed in overcrowded pens and immunized. There's a shared type of experience between participant and mustang, which helps in the healing process. They work to build a trusting and bonding relationship through one on one training.

The program is funded entirely by donations and free to veterans and first responders who participate. There are some expenses participants will have to pay for themselves in the beginning, but in the future, the Alexander's want everything to be covered by the program.

Holbrook herself is an experienced equine handler and will be volunteering her own time to help teach classes at Operation Remount. She recently started her own business called Shade Tree Equine and Canine Massage. 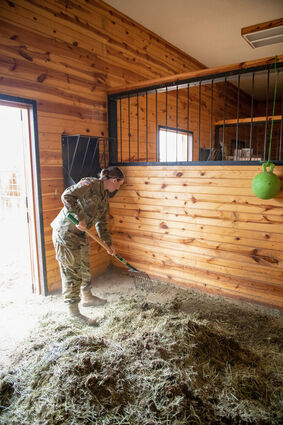 Above: Staff Sgt. Felicia Holbrook helps clean out a horse stall at the Mirrored K Legacy Ranch in Jay Em, Wyo., on May 15, 2021. Holbrook and one of her Soldiers volunteered to help prepare the grounds for the upcoming program start for Operation Remount, a veteran and first responder program to help participants with post-traumatic stress disorder or traumatic brain injuries.

"I'm a little bit nervous," says Holbrook. "It will be my first time taking what I've learned and showing it to others."

Holbrook is using these types of opportunities to volunteer to help her Recruit Sustainment Soldiers during their time with the Recruiting and Retention Battalion. Soldiers who enlist and have a while before they ship out to Basic Combat Training participate in the RSP, which is treated like a regular part-time drill with the Guard. They learn basic soldiering skills that prepare them for BCT.

"The Recruit Sustainment Program is highly encouraged to volunteer in their community, and we don't always get the opportunity to do that," Holbrook says. "I want these kids to understand that even if your military family is retired, they still might need help, and this is an opportunity to volunteer with a great program."