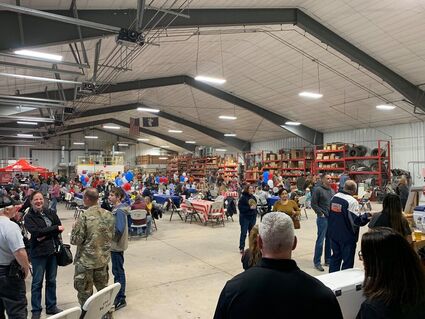 Above: Members of the military and their families enjoy the festivities at High West Energy for Military Appreciation Day held on May 15 - Armed Forces Day.

In what has become an annual tradition for High West Energy, the electric co-op hosted the annual Military Appreciation Barbecue at their Cheyenne Service Center on May 15. More than 400 people showed up in a record-setting turnout to say "thank you" to active duty military and veterans.

The event featured dozens of local sponsors as Cheyenne companies lined up to participate in the event, sponsored by the Cheyenne Chamber of Commerce. High West, which has long-standing ties to Warren Air Force Base, has worked with the chamber to host this event during Military May in each of the last five years.

"These defenders work tirelessly to ensure the freedom of our nation," said Dale Steenburgen, President and CEO of the Cheyenne Chamber. "We often take them for granted, and we must pause and take stock of their work for our nation."

Nuvision Federal Credit Union has been partnering with High West for the last several years and played an essential role in organizing the barbecue, which included more than 30 volunteers from local businesses and organizations.

"Supporting our military community has and continues to be a huge focus for us at Nuvision, especially having so many incredible service members -- both past and present -- right here at home," said Randy Butler, a senior vice president with Nuvision Credit Union. "With folks stationed in Cheyenne and far from friends and family, it's truly a privilege for our community to embody a 'home-away-from-home' spirit of support, not to mention a show of steadfast support to veterans who call Cheyenne home. The Military Appreciation BBQ was an awesome display of teamwork and gratitude, with many hands coming together to make it make it a success."

The free event featured a lunch of chicken wings, burgers, hot dogs, chips and cookies. Those in attendance also got a bag of fun take-home prizes, and donors helped provide more than $1,000 worth of giveaways. 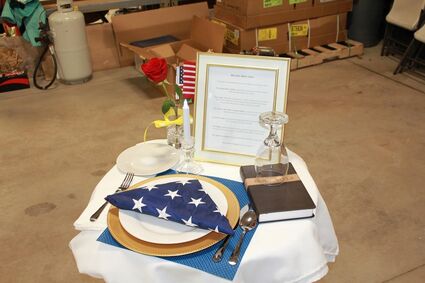 To make it a family-friendly gathering, the barbecue also included a bouncy house, face painting and balloon animals.

"To have so many people come together for this event, and to bring their families with them, we could not have been more pleased," said Jim East, marketing and communications manager with High West. "We hoped for a good turnout, and instead we saw an enormous outpouring of support for our military. This community believes strongly in giving back, especially when it comes to the brave men and women who serve in uniform."