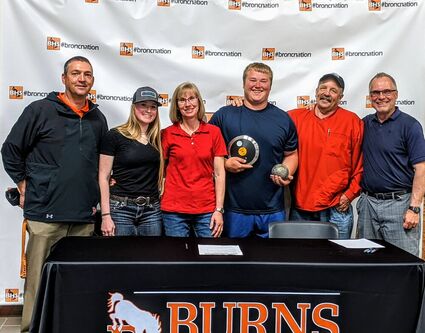 On May 24th, Wade Pollock signed for full ride scholarship with the University of Nebraska Kearney, in track and field. His major will be Civil Engineering. Pollock chose the career because his brother is a civil engineer, also. "I like a lot of the thinking of it." stated Pollock.

Pollock taught himself to throw in 5th grade. Pollock's parents went looking for a program that had the throwing part of the program. They stopped Cole Manlove in the middle of practice asking about Burns. In the seventh grade Pollock started attending Burns. Coach Cole Manlove stated that Pollock broke the s...