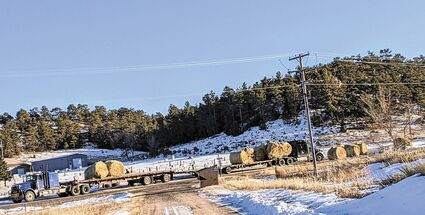 Above: Truckers arrive to clean up the load of hay that shifted and unloaded on Cemetery Hill.

Big rolls of hay were scattered across the road on Cemetery Hill in the afternoon on January 20th. A tractor trailer was transporting a load of hay was run off the road causing it's load to shift and lose its load. Pine Bluffs Police Chief, Chance Walkama stated, "A tractor transporting hay was run off the road while driving northbound on Beech Street on Cemetery Hill. The driver stated a white vehicle with Texas license plates driving southbound entered his lane of travel and he had no choice but to drive into the ditch to avoid a head on collision. The tractor trailer tipped over on it...